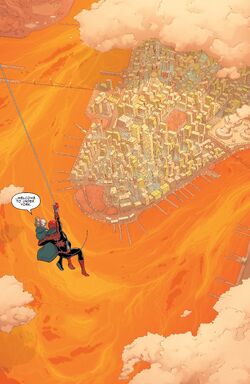 Located deep within the Earth directly under New York City itself, Under York City is a structurally identical cityscape matching New York City from the 1940s due to their interaction with surface dwellers. However, following Under York's shift to a dictatorship, they became isolated and alienated from the surface world which bypassed them in terms of cultural growth and technological advancement.

Spider-Man was led by the Rumor to venture into Under York after beginning an investigation into a missing neighbor, Leilani, after her abduction by her father the Mayor of Under York, Hale Carrick.[1]

The city of Under York is topographically identical to the surface world's New York City.

Like this? Let us know!
Retrieved from "https://marvel.fandom.com/wiki/Under_York?oldid=7020368"
Community content is available under CC-BY-SA unless otherwise noted.