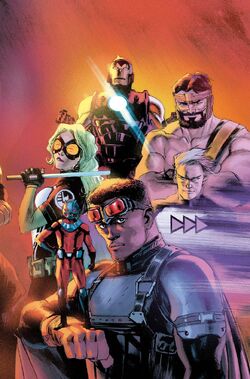 The Underground was a coalition of American superheroes and civilians assembled by Hawkeye who opposed Hydra's regime following their conquest of the United States under Captain America's leadership. They used the Pantheon's Mount in Nevada as a hideout.[2]

However, the Underground was barely scraping by, and the Mount suffered from disrepair. The Underground's attitude changed when hacker Rayshaun Lucas delivered to the group data Rick Jones gave him. The data revealed that Steve Rogers was transformed into a Hydra agent by the sentient Cosmic Cube Kobik and that Kobik was now in various pieces scattered around the world. The Iron Man A.I. proposed that the Underground retrieve Kobik's remnants, rebuild her, and use her to restore Rogers to normal. Black Widow disagreed with the plan and later left the Underground to carry out her own plan of assassinating Rogers following the destruction of Las Vegas.[3] Widow was joined by the Champions on the condition that they didn't kill anyone.[4] A team was put together by the Underground to retrieve Kobik's remnants.[1]

The retrieval team traveled to various locations around the world in search of Kobik's remnants. However, the team was only able to find two remnants before returning to the Mount to rest and to help heal Hercules' injuries.[5][6] Shortly after the team returned, Hydra led by Steve Rogers began attacking the Mount with Hydra Helicarriers[7] and members of Hydra's Avengers. Ant-Man, out of guilt, confessed to be being a mole for Hydra. He revealed that Hydra had his daughter Cassie and was using her safety as a bargaining trip to make him to its bidding. Hydra finally broke into the Mount when Rogers sent in the newly resurrected Hulk. The Underground and the civilians that there staying at the Mount managed to flee thanks to the sacrifice of the A.I.vengers, but the Iron Man A.I. was accidentally left behind. After being immobilized by Steve Rogers and a dying Hulk, the A.I. self-destructed his armor, destroying the Mount and nearly killed Rogers if weren't for the intervention of Madame Hydra.[8]

Following the loss of the Mount, the Underground became more demoralized after learning of the death of Black Widow. That was when Sam Wilson, once again taking up the mantle of Captain America, told the Underground that it wasn't over yet.[9] After giving a rousing speech, the Underground became motivated to continue the fight against Hydra.[10] After liberating New Attilan from Hydra's occupation, the Inhuman Barf produced a Cosmic Cube fragment for the heroes.[11]

After determining the the fragment had reality warping power, Sam Wilson flew miles into the air with the fragment so he could use its power to remove the Planetary Defense Shield surrounding Earth to free those trapped on the outside of it while Iron Man and Hawkeye break into Sin's and Crossbones' super-prison to free the prisoners. However, Wilson was shot out of the air by a Hydra pilot and fell into the ocean. He eventually came out of the water alive and well, and his wish for the Defense Shield to vanish came true to an extent because it awakened Quasar from her coma, and she managed to destroy the Defense Shield. During the attack on the super-prison, Maria Hill snuck in and killed Blackout to remove the Darkforce barrier around Manhattan. With the Defense Shield and Darkforce dome gone, the heroes that were trapped by the barrier united with the Underground to stage a final attack on Hydra in Washington, D.C..[10]

The Underground and its allies furiously fought against Hydra's forces, High Council, and Avengers before facing off with Steve Rogers himself wearing armor powered by the Cosmic Cube fragments Hydra recovered.[12] Rogers easily overwhelmed the heroes, but he was then tricked by Sam Wilson into accepting the last fragment when secretly contained a shrunken Ant-Man and Winter Soldier. Winter Soldier called out to Kobik in her own mindscape, allowing him to pull her back into the physical world as well as the true Steve Rogers. The true Steve defeated the Hydra Steve in a fight, ending Hydra's rule of the United States, which led to the Underground's disbandment.[13]

Like this? Let us know!
Retrieved from "https://marvel.fandom.com/wiki/Underground_(Secret_Empire)_(Earth-616)?oldid=5835052"
Community content is available under CC-BY-SA unless otherwise noted.