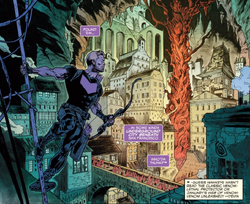 After the 1906 earthquake devastated the city of San Francisco, a section of the Tenderloin district was plunged into a cavern, becoming a haven for homeless people.[1]

Guardianship of the Lethal Protector

Decades later, corrupt businessman Roland Treece sought to evict the homeless people from the Underground City, but was foiled by the intervention of Venom - who had come to San Francisco seeking to leave his past as a super-villain behind. Venom defended the inhabitants of the Underground City from Treece's various schemes - such as an armada of Digger Suits, a mercenary team called the Jury, and the Life Foundation harvesting five of the Venom symbiote's offspring; and was appointed the Underground City's "Lethal Protector" by its governing council.[2]

The Scarmore Corporation began dumping toxic waste laced with a sentient mercury-infused virus into the sewers and other tunnels connecting the Underground City to the surface, drawing Venom's ire and the attention of lawyer Beck Underwood. Venom showed the Underground City to Beck, and she devoted herself to helping defend the city and its dispossessed inhabitants from outside threats.[3] As the city's population expanded, Venom used his symbiote to help with construction efforts in addition to his duties as its protector;[4] though he occasionally executed members of the community who harmed innocents.[5] When citizens of the Underground City were abducted by the Stalkers, Venom allied with the Spirit of Vengeance known as Vengeance to rescue them.[6]

After Venom left San Francisco to return to New York, the Underground City began working to repair the Digger Suits left behind by Treece International.[7] Years later, the city was taken over by the Cult of Knull - a symbiote-worshipping cult dedicated to unleashing the dark elder god Knull. After Carnage was resurrected and bonded to the primordial Grendel symbiote,[8] he enslaved the city's populace by infecting them with pieces of his symbiote and constructed a Spire - a massive pillar of living abyss - in the middle of the city to serve as an amplifier for his new hive-mind. Carnage sent his slaves after former symbiote hosts, but the Venom symbiote managed to free several of them.[7] The Underground City's Spire was destroyed by Hawkeye, though its populace remained infected by offshoots of the Grendel symbiote.[9]

Like this? Let us know!
Retrieved from "https://marvel.fandom.com/wiki/Underground_City?oldid=6030470"
Community content is available under CC-BY-SA unless otherwise noted.