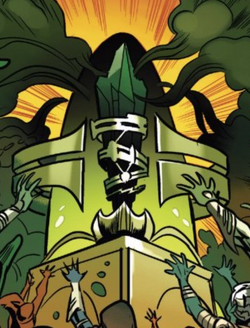 The Unforgotten Stone is a cursed artifact said to contain the malice, power, and possibly souls of Great Old Ones vanquished in an ancient war against the first Atlanteans.[1]

For ages, the location of the Unforgotten Stone was lost to time, but in the 1930s its location was discovered by the Swift Tide - an elite squad of warrior-women from various sea peoples. To prevent the Unforgotten Stone from falling into the hands of the humans, the Atlantean Empire and the chieftain of the Chasm People dispatched the Swift Tide to retrieve it; accompanied by Prince Namor of Atlantis, Prince Attuma of the Chasm People, and Lady Dorma of Atlantis.[2]

In the meantime, the Unforgotten Stone was discovered off the coast of the Russian city of Murmansk. Recognizing it as an object of great supernatural power, the Soviet officials contacted the Thule Society and Baron Karl Mordo to determine what it was. As Mordo and Baron Wolfgang von Strucker argued over whether to dredge it up, the Soviet scientists examining the Unforgotten Stone bombarded it with X-rays in an attempt to scan its interior.

This activated the Unforgotten Stone and unleashed the eldritch darkness that had been imprisoned inside it. Consuming several of the scientists and soldiers stationed at Murmansk, the power of the Unforgotten Stone engulfed and corrupted the Swift Tide, mutating them into bloodthirsty monsters that became known as the Black Tide.[1]

Like this? Let us know!
Retrieved from "https://marvel.fandom.com/wiki/Unforgotten_Stone?oldid=6430697"
Community content is available under CC-BY-SA unless otherwise noted.