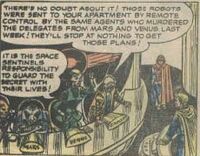 Current Members
Unnamed representatives for the human race, Venus, Nikka of the Core People, Captain Kondor of the Birdmen of Uranus, unnamed fourth member from an unspecified planet

The United Planets is a coalition of planets in Earth's solar system that are dedicated to intergalactic peace on Earth-5391 a reality where space exploration and travel boomed in the late 20th century. The events that led to their formation is unknown but by the year 2075 it included the human race of Earth, the Martians of Mars, Venusians from Venus and a four unidentified planet in Earth's solar system. They organized the Space Sentinels a team of peacekeepers to maintain order in the universe. Their primary opposition came from the warlike Saturnians.

Despite the constant attacks from the Saturnians there are not many documented instances where the United Planets council was directly involved. However the earliest documented case was when the Saturnians were attempting to obtain plans for a disintegrator ray. To this end they used a human spy as well as murdered Markov the Martian delegate to Earth and had him replaced by a Saturnian spy. However this plot was exposed and quashed by the Space Sentinel's Speed Carter[1]. Later Speed was instrumental in securing membership in the United Planets for the Birdmen of Uranus[2] and the Core People a race of stone creatures that live below the surface of the Earth[3].

Retrieved from "https://marvel.fandom.com/wiki/United_Planets_(Earth-5391)?oldid=5065899"
Community content is available under CC-BY-SA unless otherwise noted.