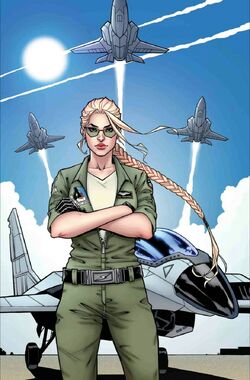 It was formed as a separate branch of the military in 1947, but its history started much earlier, as a part of the U.S. Army. The first aerial combat force was created during World War I and it was very efficient for covering infantry and tanks.[citation needed]

During the World War II it attacked Nazi and Japanese bases and some squadrons were led by Human Torch and the rest of the Invaders.[citation needed] One USAF bomber, the Enola Gay, dropped the first atomic bomb on the Japanese city Hiroshima, and then another one on Nagasaki.[citation needed]

After World War II, the United States and the Soviet Union directly threatened each other with nuclear weapons. This period of time is referred to as The Cold War. The countries never actually fought but did fund and support wars over a 40 year period.

In 1947, when a United States Air Force surveillance balloon crashed at a ranch near Roswell, New Mexico, prompting claims alleging the crash was of an extraterrestrial spaceship. It is believed that the shipped contained the aliens and was taken to a secret military base called Area 51 in Nevada.[3][4]

In 1950, the Korean War began. When North Korea invaded South Korea following a series of clashes along the border. The United States as the principal force, came to the aid of South.[5]

The Vietnam War lasted from 1954 to 1975 They also participated during the Vietnam War, sending thousands of helicopters and many bombers which smashed many enemy villages. In 1973 North Vietnam and South Vietnam continue fighting but without significant U.S. involvement. It ended with communist victory in 1975 with the fall of Saigon (later renamed Ho Chi Minh City).[6]

In 1991, The Gulf War is waged in the Middle East, by a U.N.-authorized coalition force from thirty-four nations, led by the US and United Kingdom, against Saddam Hussein's Iraqi forces.[7]

At the same time they also invaded Afghanistan, beginning the War in Afghanistan. This led to American forces installing a new government and attempting to stabilize the region, while clashing with the forces of the terrorist organizations Al-Qaeda and the Taliban.

Carol Danvers joined the airforce and rose to the top of her Air Force class, taking the call sign "Cheeseburger". While flying an experimental jet through Arabic air space, however, Carol was shot down and captured by a man named Ghazi Rashid, who tortured her for several days. She managed to escape (despite a broken leg and serious injuries), reach a CIA safe-house in the area, and provide key information to the intelligence community.[8]

Colonel Michael Rossi later recruited her to join Airforce intelligence and they worked on the Rashid case together.[9] The two's first mission together was to Berlin it was on this mission she began calling him "Ace". They travelled there to find Vitamin but he was able to escape. The two began a romantic relationship after that. But after a couple of years it came to and end.[10] Carol accomplished many different missions and worked with other figures such as Col. Nick Fury, Logan (later Wolverine) and Benjamin Grimm (later the Thing), while opposing others such as Victor Creed (later Sabretooth), and Natalia Shostakova (later the Black Widow).[11][12]

Like this? Let us know!
Retrieved from "https://marvel.fandom.com/wiki/United_States_Air_Force_(Earth-616)?oldid=6119403"
Community content is available under CC-BY-SA unless otherwise noted.