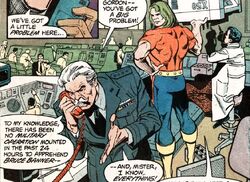 The U.S. Air Force seemingly had a similar history as its Earth-616 counterpart.

In affiliation with the U.S. Army, the U.S. Air Force hunted the Hulk until he was pardoned for defeating Metal Master. When Hulk was framed for the kidnapping of Betty Ross, they again started targeting Hulk. Lex Luthor, the C.E.O. of military contractor LexCorp Incorporated, used the opportunity, to operate the armed forces' Gamma Ray Projector. He went power hungry and kept firing even after its internal alarms went off. Luckily, Hulk was able to destroy it and Superman was able to clear him of the charges, revealing the criminal to be a robot.[1]

The Monster and the Madman

A group of criminals pretended to be United States Air Force soldiers to break into the Super-Tanker and kidnap Bruce Banner. Commissioner Jim Gordon called to ask if they were really impostors, with General Thunderbolt Ross confirming.[2]

Retrieved from "https://marvel.fandom.com/wiki/United_States_Air_Force_(Earth-7642)?oldid=5551959"
Community content is available under CC-BY-SA unless otherwise noted.