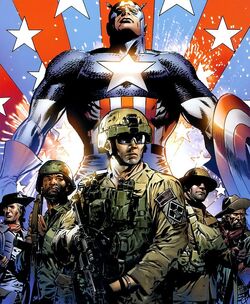 The modern U.S. Army has its roots in the Continental Army which was formed to fight in the American Revolutionary War against the British Army. After the war, the newly formed nation created the United States Army on 3 June 1784.

The War of 1812, the second and last war between the USA and Great Britain, had mixed results.

The war with the Mexican Army lasted from 1846 to 1848. The war lead to the acquisition of the territory that would later become the states California, Nevada, Utah, Colorado, Arizona, Wyoming, and New Mexico.

In 1860 eleven pro-slavery southern states seceded from the Union and formed the Confederate States of America, triggering a civil war with the northern states. In 1865 the Confederate Army was defeated uniting the union once again.[1]

Although most of the key battles of the war against the Spanish Empire was won by the U.S. Navy. The army defeated Spain in land campaigns in Cuba. After the U.S. victory, Cuba, Guam, Puerto Rico, and the Philippines came under control of the United States. Following that war, the American created the military base Guantanamo Bay.[2]

At the end of 1941 the U.S. Military began Project:Rebirth which created the Super-Soldier Serum that turned Steve Rogers into Captain America. Throughout the war, Cap and his partner Bucky Barnes[4] fought alongside infantry and with a group of heroes known as the Invaders.[5] In 1943, the U.S. Government forcibly recruited 300 African-American soldiers to serve as test subjects to recreate the Super Soldier Serum; however, only one man survived the gruesome process: Isaiah Bradley.[6]

In 1945 the closing months of World War II, Captain America and Bucky were both presumed dead in an explosion.[7] Later in 1945, the U.S. dropped two atomic bombs on Hiroshima and Nagasaki which led to Japan's surrender.

After World War II, the United States and the Soviet Union directly threatened each other with nuclear weapons. This period of time is referred to as The Cold War. The countries never actually fought but did fund and support wars over a 40 year period.

In 1950, the Korean War began. When North Korea invaded South Korea following a series of clashes along the border. The United States as the principal force, came to the aid of South.[8]

The Vietnam War lasted from 1954 to 1975 it involved the deployment of U.S. troops to Vietnam to fight the communist insurgence. In 1973 North Vietnam and South Vietnam continue fighting but without significant U.S. involvement. It ended with communist victory in 1975 with the fall of Saigon (later renamed Ho Chi Minh City).[9]

In 1991, The Gulf War is waged in the Middle East, by a U.N.-authorized coalition force from thirty-four nations, led by the U.S. and United Kingdom, against Saddam Hussein's Iraqi forces.[10]

At the same time they also invaded Afghanistan, beginning the War in Afghanistan. This led to American forces installing a new government and attempting to stabilize the region, while clashing with the forces of the terrorist organizations Al-Qaeda and the Taliban.

The U.S. army have experimented with the Gamma Bomb, which resulted in Bruce Banner becoming the Hulk.[11]

Like this? Let us know!
Retrieved from "https://marvel.fandom.com/wiki/United_States_Army_(Earth-616)?oldid=6443131"
Community content is available under CC-BY-SA unless otherwise noted.