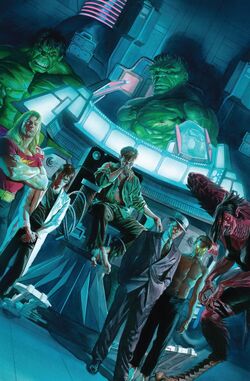 The United States Hulk Operations, also known as Shadow Base, was a clandestine U.S. Military organization tasked with hunting down the Hulk and his allies.[1]

Shadow Base was established by Gen. Reginald Fortean after the Department of Defense and S.H.I.E.L.D. failed to retaliate against the Hulk after he seemingly killed Gen. Thaddeus "Thunderbolt" Ross in battle.[2] Ross entrusted the command of Shadow Base to Fortean in an effort to maintain plausible deniability. Fortean believed that in order to fight monsters, they would need monsters on their side. They closely monitored the Hulk's allies.[1]

As part of their mission, Shadow Base captured a gamma mutate named Del Frye and brought him to their headquarters for study. Base scientists indicated that to fully understand gamma radiation and create more beings like Frye, they needed to study an actual Hulk. Fortean used his influence to send the Avengers after the Hulk, which resulted in Bruce Banner's death and capture. Banner's corpse was cut up and his various parts places in separate jars, but the Hulk eventually pulled himself back together and killed head researcher Dr. Jeffrey Clive before escaping. An increase in public notoriety in the wake of the Avengers fight with the Hulk forced Fortean to relocate operations to Site B.[3]

Agents Bushwacker and Absorbing Man were sent to find and kill the Hulk following his escape, ultimately cornering him at the abandoned Los Diablos Missile Base. The mission proved disastrous when an entity called the One Below All took possession of Creel's body and sent Hulk, Creel, Burbank, as well as members of Gamma Flight, to Hell.[4]

Shadow Base resumed their experiments and pursuit of the Hulk upon the latter's return from Hell. Bushwacker tracked Banner to Betty Ross' home in California. Disobeying a direct order not to engage, Bushwacker shot at Bruce, but accidentally hit Betty by mistake, killing her. The ensuing fight between the Hulk and Bushwacker was stopped by the sudden appearance of Doc Samson. Meanwhile, Shadow Base dug up the body of Rick Jones and grafted genetic material recovered from Emil Blonsky onto it, turning Rick into a new Abomination.

Hulk and Samson tracked Rick’s body to the now abandoned Site A where they were ambushed by Bushwacker. Hulk was doused with high levels of UV radiation and forcibly turned back into Banner, and shot in the stomach. The combination of these two events allowed the Joe Fixit personality to emerge in Banner’s body. Through some quick thinking, Joe absorbed massive amounts of gamma radiation and transformed into a giant, multi-headed Hulk and destroyed Site A, seemingly killing Bushwacker in the process.[5]

Shadow Base deployed the Abomination to Reno, Nevada, where Banner was attempting to lay low. The Abomination killed two civilians before engaging in battle with the Hulk, all while Fortean watched from a camera embedded in the Abomination's head. Fortean also sent mercenaries in an effort to contain the civilians. The situation grew grew out of control with the arrival of Jackie McGee and Betty, who, due to here status as a gamma mutate, revived from death in her Harpy form, albeit with red plumage instead of green. After a vicious between the three gamma beings and Shadow Base forces, Fortean called in air support in the form of two War-Wagons. Harpy and Hulk teamed up to take down the Wagons and successfully separated Rick from the Abomination tissue. Fortean pulled all units back when Gamma Flight arrived on the scene.[6]

Gamma Flight took possession of the shell-like Abomination tissue and brought it to their space station for further study. Fortean, clad in Redeemer Armor, translocated on board the station and forcibly retrieved it. Fortean returned it to Shadow Base scientists and ignored warnings not to touch it with his bare hands. As he approached, the tissue suddenly became animated and lunged at him, completely enveloping him, and transforming him into the monster.[2]

Fortean and his forces were later confronted by Gamma Flight first and then the Hulk and his allies, leading to a battle between them. Fortean personally battled Hulk and disfigured him with acid spray. However, the Abomination tissue caused to lose control and kill two of his own men. Dr. Charlene McGowan, head of the science division, decided that Fortean was no longer fit to command and relieved him of his duties. Despite that, Fortean continued to battle Hulk, resulting in both killing each other. They were sent to the Below-Place where Banner finally finished Fortean by breaking his neck. After resurrecting, Hulk decided to take command of the Hulk Operations with Samson acting as a moderating force.[7]

After Hulk was apprehended by Gamma Flight and Shadow Base Site G came under attack by Del Frye and Rick Jones, who were both under the control of the Leader, Hulk Operations disbanded and Shadow Base was abandoned.[8]

Like this? Let us know!
Retrieved from "https://marvel.fandom.com/wiki/United_States_Hulk_Operations_(Earth-616)?oldid=5845002"
Community content is available under CC-BY-SA unless otherwise noted.