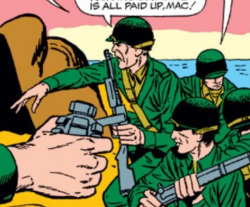 The United States Marine Corps is a branch of the US Armed Forces, serving as the amphibious force of the US military.

Maria Hill served in the Marines before joining S.H.I.E.L.D. and rose to the rank of Commander, despite being told during her training that she wouldn't be good enough.[1]

Like this? Let us know!
Retrieved from "https://marvel.fandom.com/wiki/United_States_Marine_Corps_(Earth-616)?oldid=6119406"
Community content is available under CC-BY-SA unless otherwise noted.