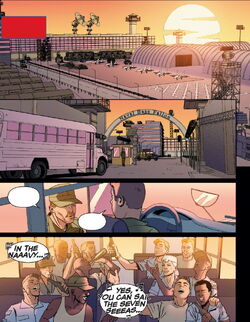 The modern U.S. Navy has its roots in the Continental Army which was formed to fight in the American Revolutionary War against the Royal Navy. It was effectively disbanded as a separate entity shortly thereafter.

The War of 1812, the second and last war between the USA and Great Britain, had mixed results.[1]

The U.S. Navy played a major role in the American Civil War by blockading the Confederates States Army and seizing control of its rivers.

It played the central role in the World War II defeat of Imperial Japan.

The Navy attempted to make its own version of Captain America using the "AVX" patch. Loosely based off of the "Power Man Process" Luke Cage underwent, it was hoped that continued applications of the patch would be a more controllable dosage and keep the subject from going rogue. Unfortunately, the process seemed to aggravated the subject; Anti-Cap mental problems.[2]

Like this? Let us know!
Retrieved from "https://marvel.fandom.com/wiki/United_States_Navy_(Earth-616)?oldid=6119407"
Community content is available under CC-BY-SA unless otherwise noted.