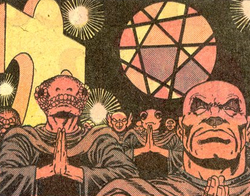 The Universal Church of Truth was a religious empire composed of diverse alien species from all across the universe. The central object of its worship was Adam Warlock's evil self, the Magus,[1] himself a servitor of the Many-Angled Ones.[2]

The Guardians of the Galaxy worked numerous times to stop the Church from resurrecting the Magus, breaking open space-time fissures like the Fault, or simply conquering planets.[4][5]

In order to prevent the Fault's expansion and the end of universe, Adam Warlock cast a spell to graft his unanchored timeline onto the only inert timestream with a stable, quiescent future he was aware of: Earth-7528. The spell was successful in stopping the Fault's spread but left Warlock weakened, enabling the Magus to take over his body.[6]

He decided to petition the help of the Many-Angled Ones, the dark gods from beyond the Fault.[7] Obeying its new masters, Magus (leading the Universal Church of Truth) and the Quasar from the Cancerverse soon work together to reopen to Fault allowing the evil denizens of Cancerverse to enter our universe, describing that event as "a beautiful moment of transcendence! A sacred beat in the heart of the Universe as everything stands still and changes". When they were approached by Lord Mar-Vell they bowed to him. Mar-Vell then asked Magus if Thanos has been killed to which Magus replied no, so Mar-Vell killed him.[2]

The head of the Church was the Matriarch, ruling from a central planet generally called "Homeworld". The planet was usually a center for religious pilgrimage, and overcrowded quickly, so the Church shifted from one planet to another every few years. Some of the places have included G5 Deneb and Sirius X, in the Hercules star cluster.[8][9]

Doctrine was enforced through the Church's Black Knights, and matters of law were subject to a Grand Inquisitor. Major battles were led by Cardinals.

The Church made use of Faith Generators, which could channel the energy of belief from its followers, for use in powering its spaceships, its Cardinals, and other uses.

Templeships were the standard vehicle for Church star travel, powered by Faith Generators and acting as battleships for their conflicts.

Many other spaceships and battleships were also used, utilising more standard weapons and energy sources.

Like this? Let us know!
Retrieved from "https://marvel.fandom.com/wiki/Universal_Church_of_Truth_(Earth-616)?oldid=5749456"
Community content is available under CC-BY-SA unless otherwise noted.