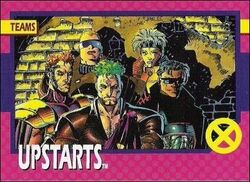 Origin
A kill-mutants game organized by Selene and Gamesmaster

The Upstarts were part of a secret competition founded by Selene, the Black Queen of the Hellfire Club, who wanted to test potential members for her own Inner Circle. Overseen by the Gamesmaster, the Upstarts would each try to kill as many mutants as possible and the Gamesmaster would award points based on the mutant's power, skills, and general significance in the world. At times he would raise the value of certain mutants so that the Upstarts would all try to assassinate them. At other times Gamesmaster would also reward the death of non-mutants. To gain entry to the Upstarts competition the requirement was to kill a member of the Inner Circle of the Hellfire Club, but later members were not required to do so; usually the Gamesmaster claimed that their participation would make the game more interesting. The member with the most points at the end of the competition would win "the prize". It was never explicitly stated what the prize was (though a statement by Andrea Strucker in X-Men #4 and a notation on the back of the Upstarts' X-Men Series I trading card state that the prize was immortality), but it was inferred that the winner would gain control over the other contestants as well as gain a lot of power and influence.[citation needed]Shinobi Shaw took the early lead by killing his father Sebastian Shaw. He celebrated with a group of contestants who were never seen again afterward. The time-traveler Trevor Fitzroy gained membership with the deaths of Donald Pierce and the Reavers. He demanded the ring that signified leadership of the Upstarts from Shaw, but Shaw refused, claiming that he still had more points. Fitzroy would go on to kill the Hellions, but Fabian Cortez applied for membership and immediately took first place in the competition for the death of Magneto.[citation needed]

The German twins Fenris tried to join the competition and gain an advantage by resurrecting Omega Red. Their plan failed though and they named only probational members by the Gamesmaster. Graydon Creed joined as well, using the moniker Tribune, and despite not succeeding killing anyone, the Gamesmaster gave him full membership. Trevor Fitzroy had met a woman in the future, named Sienna Blaze, who had told him where she would be one day. Fitzroy knew that Blaze had incredible mutant powers and told her that the Gamesmaster invited her to join the Upstarts.[citation needed]

Years later the Upstarts resurfaced to start the game that they created long ago. They killed members of the Nasty Boys in order to lure out Cyclops and his ragtag team of X-Men to Washington Heights. After a brief moment of words, the two groups engaged each other in battle. The X-Men gained the upperhand as the Upstarts retreated but Shinobi was left behind. Not wanting to get captured, Shaw mentioned that he wasn't going to be controlled by the Hellfire Club so he phased his hand into head and then solidified it resulting in his death.[1]

It is revealed that the remaining members had been captured by O*N*E, which eventually led to Siena Blaze and Trevor Fitzroy deaths. This led to the teams disbandment.[2]

Retrieved from "https://marvel.fandom.com/wiki/Upstarts_(Earth-616)?oldid=5634195"
Community content is available under CC-BY-SA unless otherwise noted.