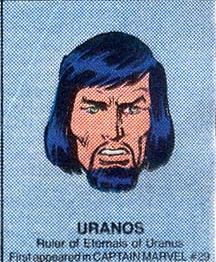 Uranos was one of the first generation of Eternals[3][4][5] who were born in the ancient Earth city of Titanos.[6]

He believed the Eternals should use their superior might to conquer the rest of the world, but his brother Kronos disagreed, plunging the Eternals into a civil war,[7] known as the "Uranos schism",[8] "Uranos War",[9] or Uranosian War". Kronos, along with Oceanus,[2] defeated Uranos and exiled him and his remaining followers into space.[7]

The exiles made their way to the planet now known as Uranus where they found a supply depot left by the Kree. The depot was guarded by Sentry #213 which the Eternals destroyed. They then used the technology left behind to make a ship and weapons they planned to use to get revenge on the other Eternals. Four Eternals stayed on Uranus to form an outpost, exiled from their own exiled Eternals group, while the rest left in their spaceship.[10]

En route to Earth they were attacked by a Kree armada sent to check on what happened to Sentry #213. Uranos and his few remaining followers survived their ships destruction and settled on Titan, a moon of Saturn.[6] The Dragon of the Moon eventually incited the survivors into a civil war that killed Uranos and all his followers[citation needed] except Sui-San. She was later found by A'Lars and together they rebuilt and repopulated Titan.[9]

After the Eternals self-destroyed then were resurrected, Uranos was confined into the Exclusion for his crimes.[11]

Like this? Let us know!
Retrieved from "https://marvel.fandom.com/wiki/Uranos_(Earth-616)?oldid=6127533"
Community content is available under CC-BY-SA unless otherwise noted.