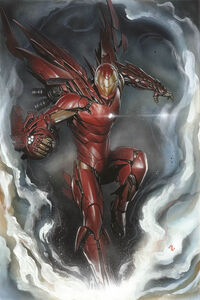 Current Alias
ADour
Aliases
Agent
Identity
Secret
Affiliation
Marvel Database, a bunch of other sites; formerly S.H.I.E.L.D. (Earth-12131)
Universe
Earth-1218
Base Of Operations
The Internet
Characteristics
Gender
Male
Eyes
Two
Hair
Yes
Unusual Features
ADour presents the unusual and incredilbe feature, very rare and uncommon, which among other unusual features is really unusual, that is the unusual feature of having the feature, which is amazingly unusual, of no having any unusual features.
Marital Status
Single
Occupation
Graphic designer
Education
Uni
Place of Birth
Earth-616
First appearance
Spider-Man 58
(May, 1995)

ADour was banished from his otherwordly home realm by his father and forced to live as a human. While piloting an experimental spaceship, he was irradiated by cosmic rays at the same time a radioactive spider that had infiltrated the ship bit him, an event which activated his latent mutant powers. He crashed back on Earth and discovered his hands were damaged beyond repair.

After looking for a cure in a temple of magical monks, he took part in a governmental project that increased his strength, speed and durability with a special serum. In the middle of the experiments, a tank with chemicals fell on his eyes, causing him to blindly walk into a booby trap that damaged his heart beyond repair. He was kidnapped by terrorists and built a suit of armor to escape. Tired of this series of oddly coincidental events, he teleported to this mundane universe without superhumans, except for maybe that one guy who swims really fast.

Revamp of Marvel Future Fight and related articles (in progress)

Overhaul of Guidelines (in progress)

ADour possess similar powers to the Beyonder, but he doesn't wear a disco shirt. He knows he wouldn't rock it.

Retrieved from "https://marvel.fandom.com/wiki/User:ADour?oldid=6078199"
Community content is available under CC-BY-SA unless otherwise noted.

Ranked #5
on this wiki