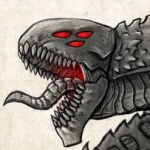 Ascha'Vovina - better known by its nickname "Asura" - is one of a group of deific monsters created by the Dark God of War, whose name was erased from the Annals of the Divine after his treachery was exposed.

Eons ago, a group of spacefaring gods known as the Oiada waged a war against a horde of draconic abominations they called the Vovina, which had sought to raze and devour all of existence. The Oiada had managed to drive the Vovina back, but fear that they would someday return and jealousy of their awesome might motivated one of their members - worshipped as a god of war - to secretly turn on his brethren, who he saw as fools for spending their time meddling in the affairs of mortals. In secret, the god of war established a facility where he performed gruesome experiments - begrudgingly enlisting a mortal warrior to assist him in acquiring ingredients with the promise of bestowing the warrior with divine power.

To obtain the final ingredient, an eldritch mutagen known as the Umbral Ichor of Mahorela, the Dark God of War and his allies sparked a war between the human Holy Empire and the Unseelie Empire - a belligerent sect of elves whose ancestors had been imbued with Umbral Ichor. For their part in the calamity, the Dark God of War's mortal pawn was imprisoned, tortured for years, and publically executed - all information about them being expunged from the annals of history aside from vague references to an "Execrated Hero". At the moment before the Execrated Hero's death, the Dark God of War kept his promise and imbued them with a measure of divine power - enabling their soul to enter the Cycle of Reincarnation and eventually be reborn.

Two Parts of One Whole

Milennia later, the Execrated Hero's soul was reincarnated into the body of Cyning - a human-dark elf hybrid. Cursed by the gods, Cyning attempted to rebel against them and at one point infiltrated the Celestial Realm and stole a suit of divine armour - which was corrupted by the Umbral Ichor in his blood. After numerous misadventures, Cyning was ultimately cast into the Underworld by the Ruling Pantheon for attempting to rebel against them, and while attempting to escape came across the ruins of the Dark God of War's laboratory. Cyning was attacked and killed by the Dark God of War, who sought to take his divine armour for himself, but the Execrated Hero's soul was drawn into one of the Oiad-Vovina hybrids. Killing the Dark God of War, it dubbed itself "Ascha'Vovina" and escaped the Underworld intent on killing the gods and those who worshipped them.

Slave of the Gods

While Ascha'Vovina proved more than a match for mere mortals and even saints and heroic incarnations, it was easily captured by the Oiada and claimed as a pet by the new God of War. The only Oiad to treat Ascha'Vovina with a degree of compassion was the God of War's sister, though she too viewed it as a mere beast. Biding its time, Ascha'Vovina spent millennia laying waste to countless civilizations in the Oiada's campaign of intergalactic conquest - becoming feared as a divine beast and god of destruction. Ascha'Vovina was also frequently dispatched to fight against the Outer Gods and Great Old Ones, extradimensional horrors attempting to metastasize throughout the Multiverse.

Once it had grown powerful enough, Ascha'Vovina turned against the Oiada - stealing a suit of divine armour and trying to annihilate them. Ascha'Vovina managed to badly wound the God of War and laid waste to the Ruling Pantheon's capital, but was pulled through a dimensional aperture before it could completely destroy them.

Finding the majority of its power had been sealed away by whatever force had abducted it, Ascha'Vovina wandered the Multiverse fighting other giant monsters and laying waste to civilizations; desiring to vent its rage over having its revenge stolen and to reattain - and surpass - the zenith of its power.

This attracted the attention of the Temporal Bureau of Investigation - a multiversal organization of time-travellers serving the Titan Cronus, who viewed Ascha'Vovina as a threat to causality and captured it. Codenamed "Asura" due to its resemblance to the malevolent gods of Hinduism and Buddhism, Ascha'Vovina was imprisoned and its power further restrained, although the director of the T.B.I. eventually hit upon the idea of using it as a weapon against those who would disrupt causality. Reminded of its time as a slave of the God of War, Ascha'Vovina vengefully bided its time and eventually broke free from the T.B.I.'s seals, making its way to the Australia of "Earth-222". After a prolonged battle against the T.B.I. and their allies, Ascha'Vovina was defeated when the entire continent of Australia was lifted into the stratosphere and dropped on its head.

Decades later, Ascha'Vovina was awakened by a mining expedition, but before it could resume its rampage it was dragged through time to the Hadean Period, impaled through the chest with an eldritch sword forged by the Great Old Ones, and buried deep in what would eons later become the glacier-capped mountains of Antarctica.

Oiad/Vovina Hybrid Physiology: Ascha'Vovina was engineered as an artificial hybrid of Oiada and Vovina, and thus possesses the combined powers and abilities of both species. These abilities were augmented through exposure to the Umbral Ichor of Mahorela.

Ascha'Vovina's armour was metamorphosed and blackened by its Umbral Ichor-tainted Vovina blood into a biomechanical Gigeresque exoskeleton studded with chitinous spines. Ascha'Vovina's abilities are greatly augmented while it is clad in this armour, and as such it continuously keeps it active in both its humanoid and beast forms.

Retrieved from "https://marvel.fandom.com/wiki/User:Ascha%27Vovina?oldid=5198999"
Community content is available under CC-BY-SA unless otherwise noted.