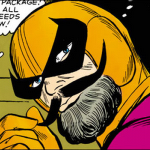 '...that he had dedicated himself, like a martyr of some dark religion, to the service of a faith which was his passionate love, but which made him an outcast among men, whose sympathy he was not to expect.'

Shifting motifs the Leaper remains concerned about the every growing Marvel Unvierse(s) Alas the Leaper and Pope muses:

Batroc AKA Lex Carson is based around Nashville Tennessee.

Ole Batroc is an avid Captain America (Steve Rogers) and Avengers fan and specializes in Silver and Bronze Age Marvel material. A recovering Marvel ZOMBIE, he has also published several articles for BACK ISSUE. One friend refers to him as, "The most trivial person I know."

Retrieved from "https://marvel.fandom.com/wiki/User:Batroc?oldid=4354844"
Community content is available under CC-BY-SA unless otherwise noted.