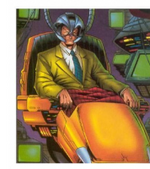 The young boy who would grow up to be the crime fighting vigilante known as Captain Rock was born Patrick Donner, in Boston. Patrick did exceptionally well scholastically, much to the jealousy of his peers. Growing up, Patrick was fascinated by geology, although he did not realize how prophetic this would be later in life. Then, one day, when he and his best friend were walking home from school, they were attacked by a burglar, who began to beat his friend to near death with a drumstick. Patrick found courage inside him to beat the burglar into submission, but his left hand was badly injured in the fight. When he arrived at his friend's house, Patrick used his knowledge of robotics to create a cybernetic left to replace his seriously injured one. That day, Patrick made a kevlar woven costume and vowed to use his physical and mental abilities to fight evil everywhere. During his first semester at M.I.T., a jealous peer stole his robotics plans and perfected a virus to kill Patrick. However, the virus went horribly wrong, and actually enriched Patrick's physical abilities. Enraged, the student used the virus on himself to kill Patrick, but again, fatally miscalculated. The virus turned him into an inhuman monster which Captain Rock fought, and defeated narrowly. Patrick graduated with honors from M.I.T. at the age of 18, and met Reed Richards after he moved to New York to start work at a private lab. Patrick followed Reed home and accidentally gained access to the Negative Zone, where he resides now. Patrick was able to contact our universe and came in the employment of S.H.I.E.L.D. as a scout agent in the Negative Zone.

Due to the effects of the Augment Virus, Captain Rock was transformed into the finest physical human specimen, giving him: Peak Human Physical Strength, Peak Human Reflexes, and

Peak Human; Ability to lift up to 800 lbs (in optimal conditions)

Cares very much for innocents

Retrieved from "https://marvel.fandom.com/wiki/User:Captain_alex?oldid=4758089"
Community content is available under CC-BY-SA unless otherwise noted.