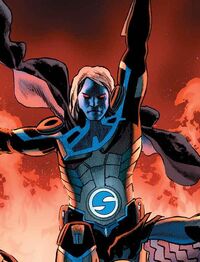 Gallery
Real Name
Tyrus Walker
Current Alias
Ultimate Sentry
Aliases
The Undying Light-Bringer, Pantheon Breaker, Herald of the Beginning
Identity
Secret
Affiliation
None
Relatives
Now why would I tell you about them?
Universe
Earth-616
Base Of Operations
Mobile
Characteristics
Gender
Male
Height
6'0
Weight
100 kg
Eyes
Blue
Hair
Black
Unusual Features
None
Status
Citizenship
I don't think it would be wise to tell you that
Marital Status
Single (Not for long hopefully)
Occupation
Adventurer and Scientist
Education
University Graduate, Also tutored in many subjects by the Living Tribunal
Origin
Origin
Like hell I would tell you that
Place of Birth
Won't tell you that either
Creators
Darksider Earth-616
First appearance
Unknown

Advanced Reality Warping: My molecules warp the reality of my physical body in a way that causes my body to become partially out of synchronization with normal reality. By being out of sync with normal reality, some of the laws of reality that apply to normal humans have been altered in my case and as a result I possess many fantastic superpowers at incredible levels.

A Lamborghini Gallardo gifted to me by Tony Stark, Starship given to me by Gladiator and Flight under my own power.

Retrieved from "https://marvel.fandom.com/wiki/User:Darksider_Earth-616?oldid=2990213"
Community content is available under CC-BY-SA unless otherwise noted.