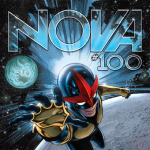 When Daniel was born all wanted him to become the strongest of their entity/race/cause therefore the Phoenix Force, Nova Corps, Captain Universe and Cyttorak gave him their powers, after this Apocalypse (En Sabah Nur) gave him the powers of his four horsemen and Galactus gave him the power of a Galactus' Heralds. Finally Daniel decided to fulfill his life-long dream to be co-king along with T'Challa, the Black Panther.

As King of Wakanda

As co-king of the striving nation of Wakanda no outside forces ever declared war and if another horrible event such as Namor attacking Wakanda is to happen again they will most definitely learn a painful lesson.

Able to kick a party up to an eleven.

Dryankee17's first contributions to the site are...

Retrieved from "https://marvel.fandom.com/wiki/User:Dryankee17?oldid=4505097"
Community content is available under CC-BY-SA unless otherwise noted.