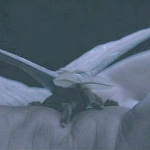 Joey was born just outside of Philadelphia, Pennsylvania to a firefighter father and stay at home mother. He also had a younger brother who suffered from autism. When he was nine, his family moved into his mothers childhood home to help his grandmother who had recently become widowed, and that's when his troubles started. Even though he had good times with his family, his parents mostly seemed miserable and unhappy, his brother was sometimes impossible to deal with, and he, his mother, and brother sometimes suffered verbal abuse. He thought things would get better when he started at a new school, but instead found himself being labeled the class clown and being bullied by classmates, to the point of some physical abuse. This caused Joey to suffer from deep depression and anxiety. He also got into trouble at times, even if it wasn't his fault. Despite all of his troubles, Joey managed to pull through it and make a few friends, find an escape in music, and even found faith in God.

When he was thirteen, Joey discovered that there was something different about him when his latent mutant powers started to surface. One day, he created a force field after falling from a ledge. Later, he started getting headaches followed by hearing the voices of people around him and healed a friend from a stab wound. The final straw was when he was attacked by a bully and accidentally sent him flying into a wall, sending him to the hospital in a coma. The stress of not knowing what was wrong with him and even more stress from home and school caused him to run away. Joey was found some time later hiding out in central Virginia by Professor Charles Xavier, who had difficulty finding him because of the mental shield he unknowingly put around his mind. Xavier told him he was a mutant and offered help and shelter at his school for mutants. He was hesitant, but accepted. Over time, Joey learned to control his powers and found many true friends who finally understood him and he took the code name Flux.

Flux is classified as an Alpha Level mutant. Nick Fury has him as a Power Level 7, O*N*E* has classified him as a Severe Threat, and Nimrod as a Threat Level: High.

Telekinesis: Flux possesses the ability to project psychokinetic energy that enables him to levitate, propel or manipulate people and objects however he wishes, lift himself and move through the air to simulate flight. With this power, Joey has a range of abilities including:

Telepathy: Flux can also read the thoughts and feelings of others, project and broadcast his own thoughts, as well as influence the minds of humans and animals with higher order intelligence (such as dolphins, ravens, or dogs). With this power, Joey has a host of other abilities including:

Has the strength of an average human who engages in moderate to regular exercise. Can increase strength with telekinesis.

If he gets upset or angry, he could lose control over his abilities

Retrieved from "https://marvel.fandom.com/wiki/User:Flux_345?oldid=5718483"
Community content is available under CC-BY-SA unless otherwise noted.