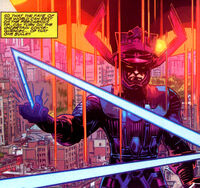 To start off, I go by the fun-loving name of Neal; I am in my early twenties and grew up in the infamous Sin City. I never got much to speak of outside of a high school education, instead i took advantage of the city's tourism flair and broke into a form of freelance Advertising. However with the economy the way it is I tried my hand at college to see if some kind of degree would help me out a bit, we'll see how that goes. I am pretty laid-back and don't let a lot really get to me. Most the time im usually just relaxing and am always ready to crack a joke; humorless need not apply.

I 've liked the X-men since i was a kid and grew up mostly on a diet of X-men cartoons. I mostly just got all my information from the likes of the animated series and Evolution, until I joined a writing site and I started out looking into my character. From there I researched others until eventually I knew quite a bit. Jump to now and I pretty much know anything relevant about X-men, follow all the comics and am Co-Admin of one of the better known X-men RPs around; Astonishment. Rags to rich I suppose.

I started out playing Neal Shaara cause it seemed appropriate, and eventually after reading comics came to like everyone's favorite Morlock Extremist-turned X-man; Marrow. I always liked how screwed up her past made her, and the effect it had on her development, not to mention the fact that her mutation is really cool but somewhat disfiguring. Unfortunately i don't really care mcuh for her what with her being written out of the comics at this point. My favorites right now are Kiden Nixon and Alani Ryan; Hellion is pretty cool too. All three have cool powers and interesting personalities. I suppose I'll try to do them some justice here. Im a pretty big follower of the comics so here's hoping all that reading pays off.

Neal has the strength of a normal human male who engages in moderate regular exercise.

Retrieved from "https://marvel.fandom.com/wiki/User:Galactus_Eater?oldid=5357682"
Community content is available under CC-BY-SA unless otherwise noted.