Marvel Database
Register
Don't have an account?
Sign In
Advertisement
in: Comics, Black Panther: The Sound and the Fury Vol 1, Cover Image Correction Needed,
and 40 more

User:Harasar/Sandbox/Black Panther: The Sound and the Fury Vol 1 2 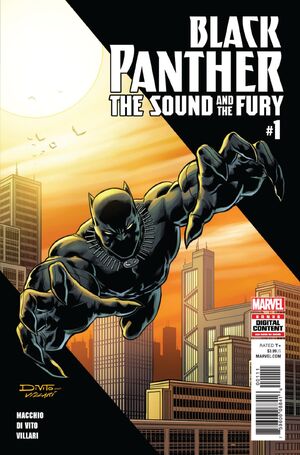 Appearing in "The Sound and the Fury!"

Synopsis for "The Sound and the Fury!"

Appearing in "The Way It Began..!"

Synopsis for "The Way It Began..!"

Welcomed as guests of the Black Panther in Wakanda, the Black Panther explains that the nation of Wakanda is unique in that it is home of a rare metal known as Vibranium. Explaining that when explorer Ulysses Klaw came to Wakanda to steal the Vibranium to make weapons, he killed the Black Panther's father. In retribution, the young T'Challa stole one of these weapons and used it to destroy Klaw's camp and in the ensuing battle Klaw's right hand was rendered useless when T'Challa's weapon caused Klaw's pistol to explode in his hand.

The fantastic technology of Wakanda comes to Dubai! But when the villainous KLAW launches a plot to extort billions from the citizens of the city, T’CHALLA’s diplomatic mission becomes a search and rescue for the BLACK PANTHER! Written and illustrated by industry legends Ralph Macchio and Andrea Di Vito, THE SOUND AND THE FURY puts the Black Panther on a mission that will test his prowess against his long-standing nemesis, as well as three new villains – BLOKK, GARROTTE, and SHEN-YU!

Featuring a special presentation of FANTASTIC FOUR #53, featuring the earliest conflict between T’Challa and Klaw, and the introduction of VIBRANIUM!