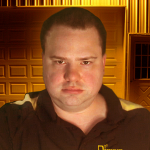 IvanRider / the Dozerfleet founder was born in Florida in 1983, and soon afterward moved with his family to Kenosha, Wisconsin. At the age of four, he was inspired while watching The Empire Strikes Back on VHS to create his own entertainment brand at some point in the future, aspiring to one day be an even more successful filmmaker than George Lucas. A crude predecessor to what would become Dozerfleet Productions started off in 1993, and was made official on October 10th-12th of 1994. Dozerfleet gained its current name on May 10th 0f 2006. It has five major divisions: Dozerfleet Literature, DozerfleetTV, Dozerfleet Records, Dozerfleet Labs, and Dozerfleet Comics. All divisions use DozerfleetWiki on Wikia as an online database for their projects, providing ready access for portfolio history and detailed discussion of their contents.

Dozerfleet Comics is by-far the most active of these divisions. It is home to a Q-Basic Gorillas fanfic series; as well as original works like Stationery Voyagers and The Gerosha Chronicles. The Gerosha Chronicles is a multiverse unto itself, with its own Earth-number system (e.g., Earth-G0, Earth-G3.1, Earth-G5, Earth-G7, etc.) The Gerosha Chronicles is the home multiverse to the Ciem webcomic that featured on Mod The Sims Social in late fall of 2008. It is also home to the TV series pitch Sodality, which features a superhero team called the Sodality of Gerosha. That team includes such heroes as Ciem, Emeraldon, the Gray Champion, Extirpon, Navyrope, Mapacha, Pilltar, Earwig, and others. It is also home multiverse to the miniseries Blood Over Water on YouTube, as well as a planned novel remake.

Acute biographical memory, if that could be called a superpower.

Experienced in MediaWiki, Photoshop, CSS, XHTML, and some database administration.

Ragweed and other airborne allergies; barley intolerance, and hidradenitis supprativa.

Retrieved from "https://marvel.fandom.com/wiki/User:IvanRider?oldid=2477358"
Community content is available under CC-BY-SA unless otherwise noted.