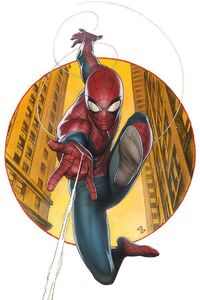 After being bit by a Radioactive Spider, that escaped from a lab, in his own home, Luis discovered his powers. After seeing the Tobey Maguire Movies of Spider-Man and reading some old comics of Spider-Man in the internet, Luis discovered that with great power there must also come great responsibility and decided to became a local vigilante in his town.

Retrieved from "https://marvel.fandom.com/wiki/User:Luismine23?oldid=5668785"
Community content is available under CC-BY-SA unless otherwise noted.