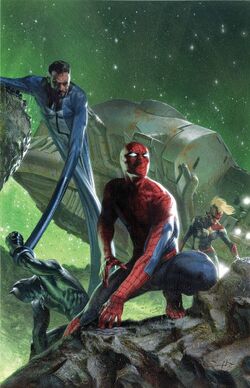 Base of Operations
Battleworld, Earth-15513
Affiliations

Origin
Created to restart humanity after the final Incursion

After the Future Foundation created a Lift Raft that could survive an Incursion, Mister Fantastic created a team of superhero scientists and guardians who could recreate and protect a new humanity.[1]

The team would narrowly the destruction of both Earth-616 and Earth-1610. Unfortunately, the section holding the the Foundation broke off and was destroyed, leaving Reed as the Foundation's sole living member.[2]

The lifeboat remained in stasis for five years before landing in Battleworld. It was found by Sheriff Strange, who hid it in the Isle of Agamotto.[3]

Three years later, the Cabal's own life raft crashed in Utopolis. Stephen came to investigate and found the Spider-Man of Earth-1610 still inside. Revealing that he remembered the last days of the of the Multiverse, Stephen took him and the Thor of Higher Avalon to his Island and opened the Raft to find the survivors of his reality. He disclosed that in their absence, Doctor Doom was the one who crafted Battleworld.[3]

When Avalon Thor was informed that the Thor Corps had found the Cabal, the team accompanied Stephen to the battle field. Shortly afterwards, Doom arrived and confronted Richards and demand the teams respect his authority. They denied him, and Stephen sacrificed his life to teleport them away to safety.[4]

In Utopolis, Mister Fantastic and his 1610 counterpart, The Maker, argue aboubt simply killing Doom or figuring out the aftermath first. Meanwhile, the Spider-Men, Peter Parker and Miles Morales, searched Doomstadt for the source of Doom's power. Running into Valeria von Doom, she reveled the secret door leading to his power. Inside, the spiders found the source of his power, Molecule Man. Even elsewhere, Black Panther and Namor located the Sanctum Sanctorum and its hidden weapons: the Siege Courageous, the Infinity Gauntlet, and the Infinity Gauntlet.[5]

T'Challa and Namor confronted Doom, distracting him long enough for Mister Fantastic to reach Molecule Man's location. Once he realized his was being played, he teleported to Reece's chamber, where Reece stripped him of his power. Reed and Victor fought and Reed was able convince him that if he had the Beyonders' power, he could do a better job of fixing reality. Seeing them on mutual terms, Molecule Man gave Fantastic the powers, and he rebuilt the multiverse.[6]

Retrieved from "https://marvel.fandom.com/wiki/User:MysteryScooby/Life_Raft_(Earth-616)?oldid=5238731"
Community content is available under CC-BY-SA unless otherwise noted.