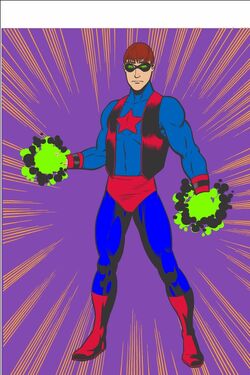 Cosmic Immortality: Cris cannot be harmed in any way, including that of Cosmic effects. Which means if he would of resides in the House of M incident, hhe would of been one of the few that new what occured.

True Power: At some point Cris was floating in space and drifted to close to Galactus. The Power Cosmic was so overwhelmingwhen he was near, that the power was absorbed and converted into a new power, the True Power. This new power was then transfered into a pocket dimension. However the power was so great though that the dimension transformed into that of the Imagination of Cris himself. This allowed him to feed of the dimension's power so he colud do many abilities such as:

Technopathy: Chris could use his Technopathy far beyond anyone's regular limits. So Feats he has accomplished are:

Retrieved from "https://marvel.fandom.com/wiki/User:SupremeMaster123?oldid=3143778"
Community content is available under CC-BY-SA unless otherwise noted.