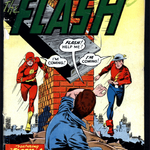 The Flash of Earth X

The Flash of Earth X

At some point in the distant past, a tribe of early humans hunted and fought a demon that had been preying upon them. The demon resembled a green bear, with a series of long, thin spikes protruding from its face and along its spine. The man who killed the bear was cursed by victory to assume the demon's form - his skin took on its green, decaying form, and the spikes from its face appeared on his. He gained the beast's ability to merge the limbs of others with his own body, but was shunned by the tribe he had helped to protect. Over the years, he adopted names that reflected people's reaction to him, and by the Dark Ages he had adapted the Germanic "schreck" (scare, fright) as his name.

At that point looking mostly human, Shreck was the squire to a powerful Shadow who was then calling himself Draghignazzo. Gravely injured in battle, Draghignazzo had Shreck bury him to create the illusion that he was actually dead, so he could heal in peace - a process that would take centuries. In the meantime, Shreck became a full knight, fighting side-by-side with Talita, a woman he loved and who, remarkably, loved him back. She soon died, however, and Shreck had her left hand encased in metal and hermetically sealed so that he might remember her touch forever, the one part of his amalgamated body that would never decay.[1]

Shreck's activities from that time until the mid-1980s are unknown, but when he was next seen, he had been serving for several years as the enforcer for the Ravenscore crime family. During an argument, Eric Ravenscore blasted off one of Ripley Weaver's metal hands,[2] which Shreck quietly collected for later use.

In Turkey, Shreck was found by two drug dealers who had been in a confrontation with the heroic Michael Devlin, knight in the Order of St. George. Taking one of the dealers' eyes for his own, Shreck recognized Devlin, and sought to prevent him from leaving Turkey. He crashed a plane on the runway at the Turkish airport, forcing Devlin to leave via train. The two fought and, with help from his traveling companions, Devlin won. Shrek's legs were chained to one car of the train, which was then uncoupled. Determined to follow Devlin, he grabbed the rail of the next car forward, but the mass and momentum of the separating cars eventually tore his legs off.[3]

Shreck survived, of course, but now held a personal grudge against Devlin, rather than the cold, impersonal "just business" attitude he displayed toward most of his victims. Shreck informed the Ravenscores that he would be leaving their employ temporarily, until he had taken his revenge on Devlin. By this time, Draghignazzo had returned and was posing as the hero Dr. Zero. Shreck sought Zero's permission to kill Devlin, but was denied; he could stalk Devlin, but only kill him if he told Zero first.

Tracking Devlin to Nicaragua, Shreck managed to get the best of him after a protected brawl, then proceeded to crucify the man to a tree - he didn't have permission to kill Devlin, but he could certainly let him die. Devlin freed himself, however, and ambushed Shreck, continuing their fight. The pair tumbled over a waterfall, but the battle was only decided when Devlin dumped Shreck in a lake that was teeming with piranhas. He offered Shreck his hand, but when it became obvious the killer was taking that literally, he let go, and Shreck sank to the bottom.

Hours later, after the fish had departed, scavengers found Shreck's skeleton and prepared to remove the gold fillings in his teeth. Despite the massive damage he'd incurred, Shreck was still alive, and rebuilt his body from the men who had found him.[4]

It was some time after this that Shreck journeyed through unknown means to Earth-616 and set himself up as the mercenary assassin Terror. He had an unspecified history with Wolverine, a "long-standing series of markers" between them.

Terror first appeared in the "modern" Marvel universe when he was contacted by Las Vegas mobster Deragon, looking for an advantage in the process of dividing the Kingpin's criminal empire. While in Las Vegas, he met Daredevil, and offered him information in exchange for helping to protect him from New York City's many superhumans, should the need arise.[5] He next assisted Wolverine and Jubilee against a group of murderous eco-saboteurs.[6]

Hired to perform a hit on crimelord Piranha Jones, Terror found himself at odds with the Punisher, who also wanted Jones dead. Getting in each other's way, the two lost Jones as they fought among themselves.[7]

When Deadpool founded the Mercs for Money, he employed the services of Terror, among numerous other mercenaries, to pose as him in order to extend his reach across the globe. In one of his missions, Terror patrolled the streets of New York along with fellow teammate Foolkiller.[8]

The Mercs for Money eventually became disgruntled by Deadpool, from the way he treated them to the delays in their paychecks.[9] When they set out to create their own business, the Mercs discovered Deadpool had been skimming on them.[10] After retrieving and burning their contracts from a safety deposit in Ho-Ho-Kus, New Jersey, the Mercs and Deadpool parted ways.[11]

Limb Replacement: Terror has the ability to replace lost body parts with limbs and organs taken from others.

Acid Secretion: He secretes a natural acid that serves as both solvent and glue: the substance loosens the connective tissues in the target body, allowing him to more easily rend the parts he needs; Even if reduced to a head, torso and single arm, this allows Terror to gain enough leverage to remove the needed parts. Once that is accomplished, the substance then helps bond the purloined limbs or organs to Terror's body.

Knowledge Inheritance: Upon grafting the new pieces to his body, Terror becomes immediately aware of the previous owner's last memories and strongest emotions. In some cases this is a liability, and he must ignore this knowledge to complete his task.

Skill/Power Inheritance: In addition to memories, Terror gains the skills and abilities of the donor. A safecracker's ears, for instance, would allow him to hear extremely well, while a martial artist's legs would make him a superb fighter. Though he normally uses human parts, Terror has been known to use anything that he considers useful, such as large wings or a prehensile tail. The same holds true for parts taken from super-powered beings, though the power must be related to the body part claimed; if Terror took the legs from a superhuman who could fire energy blasts from his hands, he would not gain that skill.

Though the body parts bond permanently with Terror, they are still dead tissue and will begin to decay at their natural rate. This gives Terror a distinctive odor, and also forces him to seek a constant supply of replacements. Fortunately for him, his line of work brings him into contact with many people who he no qualms about crippling or dismembering. Since his entire body is already dead, many conventional attacks have no effect on Terror. He can survive being impaled, crushed or drowned, for instance - the only limit are injuries that incapacitate or restrict him physically. Presumably, if cut off from a usable supply of corpses (or victims), Terror's continual decay would eventually consume him.

The spikes on his cheeks are the symbol of his power and his curse, inherited from the demon he slew to gain them. They can be removed and used as weapons, and if they are lost or damaged, they will regrow.

Variable depending upon attached limb or organ.

Variable depending upon attached limb or organ.

His body is in a constant state of decay, requiring him to constantly replace all parts of his body.

Retrieved from "https://marvel.fandom.com/wiki/User:The_Flash_of_Earth_X?oldid=5250282"
Community content is available under CC-BY-SA unless otherwise noted.