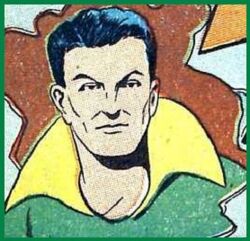 Many years ago a star ship from the planet Aaramith came to planet Earth to seek refuge from a war back on their home world. However, the ship had been damaged in their escape and by the time they reached the atmosphere of the planet, the ship began to break apart and everyone scrambled into the escape pods.

Zaxxon Poon's pod landed far away from his shipmates on the side of a mountain in the continental United States, crashing into a building. When he emerged from his pod in a state of shock, he realized that there was an injured man near him. Leaning over to check on the man, a strange event happened when they made physical contact, Zaxxon absorbed all the memories and personality of Thomas Andrew Dailey and then physically transformed into a perfect replica of the man. Utterly confused by the course of events, Zaxxon Poon stumbled naked out of the building and into the wilderness when the building he was in suddenly exploded, throwing him down.

Later, he was found and was mistakenly thought to be Thomas Dailey, who was suffering from a head injury and was confused and in shock. After he was discharged from the hospital, he was very confused as to who he was. Thomas' personality had completely pushed down his own natural one, but everything seemed new to him, even though he knew most of these things already.

After he recovered, Zaxxon returned to Tom's life and still possessed by his personality, eventually married Tom's fiance. They had a happy time together, even having two completely human children together. However, Zaxxon Poon's true personality and memories began to reemerge from their long slumber in the back of his mind.

Eventually Zaxxon's mind reasserted itself and the identity of Thomas Dailey began to fall away. Zaxxon still retained Tom's memories, but his true personality was showing more and more as each day passed. Eventually his marriage suffered and they finally parted in divorce and then Zaxxon Poon began to search out his missing refugees from the day their ship fell to pieces, including his brother, Zantac Poon and his missing fiance, Zeem Paac.

Like this? Let us know!
Retrieved from "https://marvel.fandom.com/wiki/User:Zaxxon_Poon?oldid=3733891"
Community content is available under CC-BY-SA unless otherwise noted.