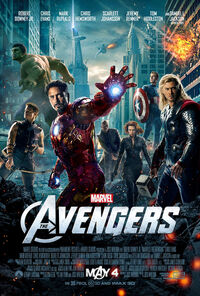 Well, this is a quick review of the biggest movie blockbuster you'll ever see: The Avengers.

The plot of the movie is simple, Loki negotiates with the Chitauri an army to take Earth in exchange of the Cosmic Cube. Loki steals it from a S.H.I.E.L.D. research facility (destroying it in the process) and starts building a machine to use it, with the help of a mind-controlled Dr. Selvig and Hawkeye.

Now it's turn to see the heroes in action, we see how the Avengers are recruited: Black Widow takes down three bad guys, Coulson informs Tony Stark about the situation just when the Stark Tower is inaugurated, Steve Rogers is still recovering from his power nap and that he lost many things, Bruce Banner is contacted by Widow in India and asks him for help to find the Cube, because it emits a low-range Gamma radiation and S.H.I.E.L.D. needs an expert. Finally, the awaited moment when Steve Rogers, Coulson, Romanoff and Banner arrives to an (apparently normal) carrier, but it's revealed to be a HELIcarrier!

In Germany, Loki and Hawkeye are searching for a material needed to stabilize the machine in which they'll use the Cosmic Cube (from now on, I'll call it "the thing"). He starts doing an act of "I am your king! Kneel!" when Captain America appears and battles him, Iron Man manages to attack him off guard and take his sceptre. Loki surrenders (too soon?) and is taken to the Quinjet. While there, a electric storm is approaching:

Capt.: What's the matter, scared of a little lightning?

Loki: I'm not overly fond of what follows.

Thor appears and takes Loki out of the Quinjet, in order to take him back to Asgard. Iron Man decides to battle Thor, but Captain America arrives to calm things down and state they're in the same side.

At the Helicarrier, Loki is put in a special containment unit designed for Hulk. Stark arrives and explains the nature of the Cosmic Cube in his humorous way. Banner and Stark are trying to get a sign of the energy of the Cosmic Cube. Stark mocks on Cap as he tells Rogers that even "Fury's secrets have secrets", Stark uses J.A.R.V.I.S. to get into top secret files while Captain America does his own investigation. Meanwhile, Coulson (or Hill, I dunno remember) tells Thor that Jane Foster is safe. Widow is interrogating Loki while she explains her life and manages to known he plans to use Banner, or rather Hulk. When she gets to where Banner and Stark are, Nick Fury arrives as Tony tells him he discovered that S.H.I.E.L.D. wanted to build weapons of massive destruction with the power of the Cosmic Cube, Captain America finds some Cosmic Cube-powered Hydra weapons in a weaponery and wants anwers to Fury as well. Natasha wants to get Banner out while everyone starts arguing, they are interrupted by a computer with the location of the Cosmic Cube.

Meanwhile, a Quinjet reports to the Helicarrier asking for permisson to land, but Hawkeye and the other Loki-possesed agents are in that Quinjet. Using an arrow and his eye, Barton explodes one turbine. If another turbine goes off, the whole Helicarrier will start loosing height. Iron Man and Captain America tries to repair the engine; Nick Fury, Coulson and Hill are dealing with agents; and Widow escapes from Hulk. Thor arrives to help Widow as she moves to fight Hawkeye and manages to knock him out (in an amazing fight scene where we have the feeling of a battle to death). Thor can handle the Hulk, at one point Thor drops the Mjolnir and Hulk tries to lif it... He can't (thanks God). A S.H.I.E.L.D. pilot tries to fire to Hulk, result: "Target angry! Target angry!". Hulk jumps to the jet and starts to destroy it, finally, Hulks falls and crashes in Manhattan. Other engine is destroyed but Iron Man makes his way to repare the other, Captain America has problems as he handles some agents (he uses a machine gun!) but they manage to fix it. Thor goes for Loki, who tricks him to put him in the containment unit, Coulson tries to stop him, but he's killed :(

Loki: "Humans say we are immortal, let's find it out".

Loki makes the containment unit fall from the Helicarrier, but Thor manages to avoid his death, although he falls in the countryside. Loki finally escapes.

Later, Widow is taking care of Barton at the infirmary while Fury tells Cap and Tony he's disappointed and shows Coulson's bloodied Captain America trading cards. They decide to act as they realize Loki is in New York, after gathering Black Widow and Hawkeye, they fly away in a Quinjet.

Meanwhile, Banners wakes up in a destroyed warehouse, where he crashed and the guard gives him pants. Thor in the countryside recovers his hammer. Iron Man gets to the Stark Tower where he sees Selvig activating "the thing", as he can't stop it, he goes down as he sees Loki in the balcony. He takes off his armor and starts talking with Loki, "We have a Hulk" moment and Loki throws Stark through the window, as he falls he activates and suits up with the new Armor MK VII.

The following scenes may not be in order as it was so epic that I can't remember the order, I was only paying attention to the epicness

The portal finally opens and the Chitauri arrives, Thor, Iron Man, Widow, Hawkeye and Captain America tries to take down as many Chitauri as possible. Banner arrives to the scene to join the Avengers as Iron Man gets the attention of a Leviathan-like creature to them, Banner goes to the Leviathan as he says: "That's my secret... I'm always angry". He transforms in the Hulk and crushes the Leviathan, but more are coming (FAIL! LOL) Cap divides the team while everyone gets his/her epic moment. Thor blocks the portal by electrocuting Leviathans, Clint uses his sight to report any problems or whatever... I can't remember anymore... Thor battles Loki but he escapes by tricking his brother and stabbing him (without much damage). Widow gets to the Stark Tower and Selvig (returned to the good side) tells her how to shut down the portal. Meanwhile at the Stark Tower, Hulk battles Loki, he tells Banner he can't attack him because he's inferior: "I am a God! I am not going to be bullied by a --", but Hulk doesn't give a kcuf and grabs him by the leg, hitting him all over the place (this is the moment when all the theater clapped)... "Puny God".

At the Helicarrier, the World Security Council tells Fury they'll nuke Manhattan. Fury informs Stark and he diverts the missile to the portal, nuking Chitauri's ship, apparently it has a vital connection with its soldiers, and as it explodes every Chitauri on Earth dies. Iron Man falls from the portal and is catched by Hulk, he's apparently death, our green Goliath roars and scares Tony, waking him up. Back to the Stark Tower, Loki recovers consciousness, but is pointed by Hawkeye and the rest of the Avengers behind him.

Epilogue: Loki is taken by Thor back to Asgard with the Cosmic Cube, Tony and Banner goes away in the same car and Steve goes away in his Harley... Back at the Helicarrier, Fury tells Maria that if they needed them, they'll return.

Oh, wait! After the cool credits (the ones with the 3D things which only mentions the actors and most important names) we see the Chitauri homeland, the Other is telling his lord that the humans are not the cowards they were promised and they can't be ruled... that battling they could be like courting Death... his lord turns his head smiling... IT'S THANOS!

The Great (aka: the Review)

This movie is totally awesome, the plot is consistant and almost everything is well explained. The reason why every member is in the team, as well as the reasons of Loki and the Chitauri

The dialoge seems natural and most of them have a touch of fun or are funny, especially the ones with Robert Downey Jr., whose attitude is just incredible...

The action scenes are many, and they are fluid and really amazing with good takes

Everycharacter gets his/her moment, what pulled out our fear for underused characters. That fear was particullary focused in Hawkeye, who got his own subplot and good a$$ kicking scenes such as his fight against the Chitauri.

Tom Hiddleston does an amazing job as villain, where it looks like having that kind of crazyness caused by despair and vengeance, especially that scene where he cries.

Hulk is totally awesome, the best Hulk we've seen. He's smashing rages are not only destructive but funny. And we can see his competitive attitude with his fellow "teammates" as well as that humurous resentment, when he punches Thor after defeating Loki.

The Chitauri worked well, it looks like they are not the morphing aliens from Ultimates... yet, but they worked pretty well.

At the end we could see the "transformation" of Tony Stark to a hero, when he does an act of heroism to save his city reflecting Steve's sacrifice, when was Rogers himself who stated that Stark is not a hero.

The Cosmic Cube is called Tesseract or "cube"... never "Cosmic Cube" :/, well that didn't bother me.

Natasha Romanoff is called "Black Widow" once in all the film.

Clint Barton is called "Hawkeye" once, during the Chitauri battle... and "the Hawk" at the start of the film. >:(

I wanted to see at least a cameo of Hank Pym and Janet van Dyne... no :(

Thor: I care how you speak. Loki is beyond reason, but he is of Asgard. And he is my brother.

Retrieved from "https://marvel.fandom.com/wiki/User_blog:ADour/Avengers_Assembled!_(a_quick_review_of_the_movie)?oldid=1925587"
Community content is available under CC-BY-SA unless otherwise noted.