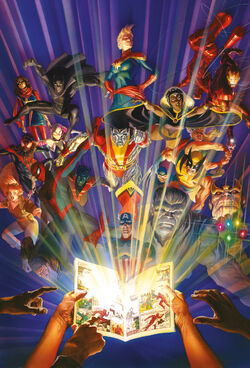 Eighty years ago this day (assuming you're in a time zone where it's still August 31, though to be fair I'm posting this fairly late), Timely Comics published Marvel Comics #1, helping usher the Golden Age of Comic Books. That 10-cent comic book introduced the first of an endless pantheon of colorful super heroes, the original Human Torch, the Angel, the Sub-Mariner, the Masked Raider, and Ka-Zar.

In our end, we've been celebrating Marvel's 80th Anniversary for a while, with the mosaic background image we have been sporting for a while now. It's a collage meant to represent and commemorate all the different facets of Marvel not limited to comic books, including some snippets of Marvel's history in animated series, movies, toys, video games and more! It also includes a fragment of a profile from the Official Handbook of the Marvel Universe which served as the inspiration (and precursor in a way) for this very same website, a cosplay photo to pay homage to us, the fans that give this company and its characters the significance they have, and a photo of the mythical Marvel Bullpen to honor the creators like Stan Lee, Jack Kirby and Steve Ditko that laid the foundation of what Marvel currently is.

Retrieved from "https://marvel.fandom.com/wiki/User_blog:ADour/Happy_80th_Anniversary,_Marvel!?oldid=5069552"
Community content is available under CC-BY-SA unless otherwise noted.