Kai aka Dragon Sage is the son of the Elder God dragon Shrenloe the primordial dragon (fanfic) & the half-brother of Psorceress. He is also the creator of the Draconic Pulse. 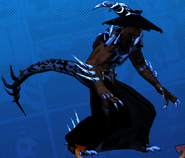 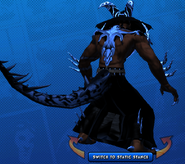 Kai was born & raised partly by in K'un-Lun. There he was trained in the arts of fighting & mastering chi. Due to his potential, he was trained harder than even Iron Fists. He grew up fairly happy there. The other half of his life was raised in New York City. There, he studied the world, human nature, heroes & more. He enjoyed a comfortable life in NYC but he was constantly reminded of the one's who aren't so lucky.

Kai wanted to help people so he enrolled to a charity center for homeless young people/kids. The organization was run by a group of kind women (named Delilah, Jezebel, & Eve) that Kai suspected nothing from. Kai worked there for free because he just wanted to help. Later on though when Kai returned after his shift only to witness a grim truth. The whole charity was a front for it to actually be a Black Web brothel & Delilah, Jezebel, & Eve ran the operation. They themselves participated in raping many of the young girls & boy there. Kai was utterly traumatized by this & ran several blocks away. His immediate reaction soon after was too go back & stop them. he did so in an very violent way. kai burned Delilah, Jezebel, & Eve so that they would be scared permanently & be permanently injured but not dead. The victims of the operation he keep hidden away & brought them food, water, clothes, & other things to. Kai himself was traumatized just by what he saw himself. He experience irrationally large amounts of anger & rage for no reason. He would get angry of the smallest things. Kai returned to K'un-Lun for a time to heal & continue training. When training to control his rage her learned of the technique Tranquil Fury; it is were one doesn't suppress their anger. Instead, one constantly channels it through their mind & body allowing them to think & feel like a normal human. In battle though, their ferocity is immense but they are able to think soundly. Kai returned from K'un-Lun as a new man with a new plan.

Taking Down the Sex/Human Traficant system

Kai decided to use his power & skills to disassemble the sex trafficking's system. along with him, he trained the young adults from the charity. He had trained them in his own fighting style, the "Blood Fist" & he granted them the Dragon Pulse. However much they trained determined their power applications. They learned enough to kill many thugs in the system easily.

Kai is generally a very funny person who always tries to make his friends laugh. He also is very positive. He has a vast knowledge of cosmic entities, creatures, & cooking. He also has shown to have a ginues level intellect for fighting as well. He can also be very cluless with a quite a few things. He's also very kind & caring. He also is very empathetic, going as far as to use his telepathic powers to feel the pain others feel so he can make them feel better. When in battle however, Kai is very violent & brutal. Depending on who he's fighting, he may be too angrey to wise crack (which is a bad sign).

In short, Kai is a sweet, hilarious, semi-slow cinnamon roll you don't want to piss off.

Squrriel Girl/Doreen Green: By far, Kai's best friend is Squirrel Girl. This can be seen in when they crossed paths at Starks Tower. Upon seeing each other they screamed, "WWWAAAAAAASSSSSSSSSUUUUUPPPP!".

Deadpool/Wade Wilson: Kai is very good friends with Dead Pool & actually loves his crazy nature. They have also greeted each other by saying, ""WWWAAAAAAASSSSSSSSSUUUUUPPPP!".

Captain Marvel/Carol Danvers: Kai & Captain Marvel are very good friends & she enjoys having someone to laugh at her cheesy jokes. Captain Marvel enjoys doing karaoke with, watching old movies, & playing Monopoly (even though it often ends in a brawl).

Kai hasn't dated many women really. He has stated to have only been serious with two women, Gaea & Sersi.

Gaea: For Gaea, he had a crush on her ever since he was 16. He didn't make any moves because in mind it was illegal. He did act on it once he was 18 though. He admitted his feelings. She didn't really reciprocate but did state to have "a kind of loved & fondness". He was a little confused by this though. She engaged in in-depth conversations with him & she did describe some female views that would be useful for him (a male) should know. He did eventually asked if she would have intercourse with with which she agreed. Like many other young ones, he expected it to be special. He stated that physical aspect was exemplary, he did state the emotional connect he was looking from it ceased to exist. In the end, he just felt a little dirty & guilty & vowed not to sleep with another person until he knows they are the "one". He broke off his relationship with Gaea in which she expected. she stated if he ever needed someone to talk too, she was there. He did go back & talk to her. They are good friends.

Sersi: Kai meet Sersi sometime in New York City. He saw her & he was startled by her beauty. He was observing her from a distance but then noticed her head was turning towards him. He then used his immense speed to move his head quicker than he could see. He thought he was in the clear but he could hear her read his mind. He instinctually responded. They both thus, accidentally exposed their identity. They talked on the roof about who/what they are. They started a good friendly relationship talking to each other for a while. During his time dating her, he discovered the charity at which he worked was corrupt. He experience a low point & even seekde therapy. Sersi herself also aided him in his healing. After 2 years of talking & her emotional support, Kai eventually realized "the one" was Sersi. He admitted his feelings to her & she reciprocated. They almost engaged in intercourse but the memory of the young people being assualted by the charity's owners. He stopped & said that he wasn't really ready. Time went by & they built up their relationship. He proposed to her once he fully mentally healed & after he formed the team '"Dragon's Wrath". She gladly accepted & they got married.

"Transcendent Dragonborn" Physiology (Elder God Dragon/Human Hybrid): Kai is then offspring of a human and the Elder God dragon Shrenloe. Biologically, he's a dragonborn (human/dragon hybrid) of transcendent level status. Due to his unique physiology, Kai has various superhuman attributes.

Kai's father, Shrenloe, had control over Primordial Force which gave him immense powers putting him a step ahead of most other Elder Gods. Due to his immense power, he knew his son would have immense powers & without training could result in an unstable power set. Shrenloe allowed Kai to create his own force with rules, limits, & rivals.

Draconic Pulse: The force that Kai wields immense and unbelievable draconic power than beyond that of worldly comprehension. The draconic aspect of this power allows him to control draconic energies & also allows him to overwhelm weaker dragon as well as surpass most draconian entities. Kai can also control relics, objects, weapons, etc. that are draconic in any way be it in power or a dragon power link. The other aspect of this power allows him him to fight on par with, & overwhelm other beings of transcendent power. The power grants various abilities in general:

Weapons Master: He has been trained in the use of almost all martial arts weapons.

Parkour Master: Kai is the best parkour artist in the world. He relies on this skill mostly when traveling.

Tranquil Fury: Kai has learned to attack in full rage while retaining control and are able to attack with the relentless strength but can think out his moves.

Chains: While Kai can use various weapons, he chooses to use chains as his weapons. He proves to have great skill over them & while they seem short they appear to be limitless. He can grab onto/throw things/people & he's even used it to slice. These chains are made of some unknown material as Adamantium. He bounded his life-force to this weapons & they obey his command.