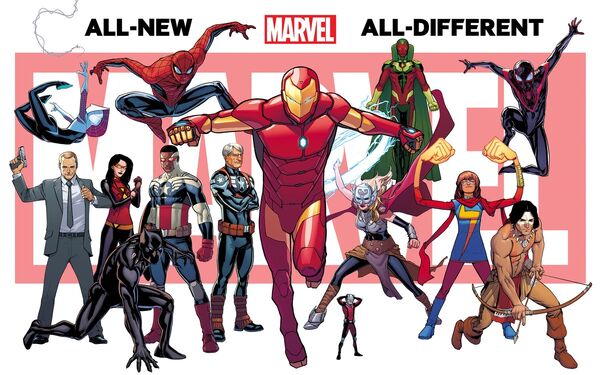 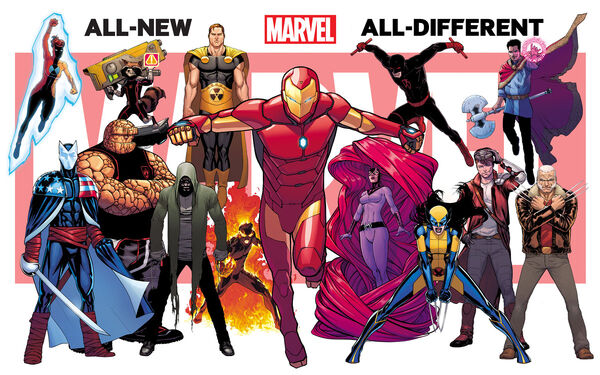 Only Some Titles Are Awesome

Within the All-New, All-Different Marvel Now!, there have a significant number of titles that still continue to impress me, including the Ultimates, Amazing Spider-Man, Invincible Iron Man, the All-New, All-Different Avengers, Deadpool, and the Vision. For example, in the Ultimates, Al Ewing and Kenneth Rocafort are creating a series with a unique point of view on the concept of metafiction and I am so impressed that Blue Marvel and Black Panther have become outstanding leaders, men of self-worth who lead through example. With the Amazing Spider-Man, the title greatly displays how hard it is to be a CEO of a company and a superhero at the same time. The art-work of these titles are also surprisingly on point and go really well with the story-lines. Keep it up!

However, most series in the relaunch are either mediocre or just plain terrible that they need to cancel the series. Hyperion, All-New Wolverine, All-New X-Men, and All-New Inhumans NEED to be cancelled in my opinion. Hyperion is a series that I had hopes because I wanted them to address what makes this specific Hyperion different from the rest of the Hyperions (King Hyperion, Earth-712 Hyperion, Earth-31916 Hyperion), but the stories that came with this series turned out to be fighting a bunch of circus freaks (for some reason they are stronger than him even though he's Marvel's Superman) and rescuing a girl named Doll. All-New Wolverine is a series that fails to display X-23 in her own special way, in other words this title displays her as "I'm the worst at what I do, but what I do is not very nice." All-New X-Men also falls to this trap as the writers are running out of ideas on what to do with the X-Men. In previous issues of All-New X-Men, it has been stated so many times that the original X-Men cannot return to their correct moment in time. How is it then that Wolverine was able to prevent the Age of Ultron from happening, the Uncanny Avengers went back in time to prevent the Apocalypse Twins from destroying the Earth, the Brotherhood arriving to Earth-616 to kill the X-Men, and that Kang still managed to be split apart in time as Mister Gryphon? HOW THE F*** IS THIS EVEN POSSIBLE? For the All-New Inhumans, in my opinion, Uncanny Inhumans is a much better title than All-New Inhumans due to a clear storyline and plot and this series isn't really necessary as they just keep on retconning mutants into Inhumans, for example, Ana Kravinoff.

WHERE THE F*CK ARE THESE CHARACTERS?

After Secret Wars, I have been noticing that characters are mysteriously disappearing from titles. Like they haven't even been appeared in ONE SINGLE ISSUE out of all the series of the All-New, All-Different Marvel Now. Before Secret Wars, these characters served a good purpose in Jonathan Hickman's Avengers and New Avengers run, but now they just mysteriously disappeared. These characters are Captain Universe, Manifold, the Gardeners, and Shang-Chi. Not only that, I haven't even seen some legendary X-Men in the pages of Extraordinary X-Men, All-New X-Men, and Uncanny X-Men, such as Emma Frost, Havok, Polaris, Quentin Quire, the Stepford Cuckoos, or X-Man. I hope that they at least appear in one issue, so that we know if they're still alive or dead. Even the Sentry has gone missing as we last saw him carrying a Celestial away from Earth. I'm just hoping that characters who are underused get a chance to shine in the new Marvel Now.

Events Are Way Too Overhyped

Ever since Secret Wars (the 2015 one, mind you) came out, this event has raised the bars for Marvel and ever since that comic book events have become mediocre in comparison to Secret Wars (ex. Assault on Pleasant Hill). Even I wasn't really too excited when I heard there was going to be another Civil War coming out (HOW GODDAMN CIVIL WARS ARE THERE GOING TO BE???). I feel that Marvel is slowly dying out as they keep on revisiting on other events and using the Marvel Cinematic Movies to boost up their comic book sales. Marvel, please take a lesson from DC and do something like the Court of Owls for a change instead of using Thanos as your main villain for Civil War.

Recent monthly sales reports seem to bear this out, with many current Marvel titles selling lower and dropping faster than their 2015 equivalents. There are a number of trends to be gleaned from these sales figures, but speaking solely from my own perspective as a reader, I don't feel enthused about the state of the All-New, All-Different Marvel Universe in the same way I did the original Marvel NOW in 2012 or the Heroic Age-era Marvel in 2010 or the post-Avengers Disassembled Marvel in 2005. The fact that this year's post-Civil War II relaunch is simply recycling the "Marvel NOW" name does nothing to decrease the "been there, done that" sensation.Marvel should really stop this and come up with original story-lines, for Christ's sakes.

Not Enough Diversity Towards Any Minority Other Than Blacks

Despite making Kamala Khan the new Ms. Marvel and Amadeus Cho the new Hulk, I still feel that Marvel is not doing enough for its diversity issue. Making everyone black does not solve a diversity issue as there are a ton of black superheroes out there (Black Panther, Falcon, Luke Cage, Blade, War Machine, Rage, Storm, Misty Knight, Nick Fury Jr, Doctor Voodoo, Bishop, Spectrum, Cloak, Night Thrasher, Deathlok, Gentle, and several Black Captain Americas), but there's not a lot of Asian superheroes, Latino superheroes, or other superheroes of included in major events or story-lines. Either they are side characters or just heroes/villains that are underused (Shen Kuei, the Cat, for example). On the other hand, DC's appealing to the Chinese market by finally having an Asian Superman, Asian Batman, and an Asian Wonder Woman. Why can't we have a freaking Latino Captain America, an Asian Spider-Man, or a Latino Thor?

How Did This Happen?

In the All-New, All-Different Marvel Now!, Iron Man is magically back to his heroic self, Daredevil now has his secret identity, and Cyclops apparently dead (again) for reasons unknown. What the heck happened in those eight months? And please don't say that Mister Fantastic magically planned for all of these things as that ruins everything.

That is the end of the blog! Let me know which things you didn't like about the All-New, All-New Different Now! in the comments section below!

Retrieved from "https://marvel.fandom.com/wiki/User_blog:Pokemonmewtwos/WHAT_I_DISLIKE_ABOUT_THE_ALL-NEW_ALL-DIFFERENT_MARVEL_NOW!?oldid=3567782"
Community content is available under CC-BY-SA unless otherwise noted.