SPOILERS (AND POSSIBLE SPOILERS FOR FUTURE STORIES) AHEAD! 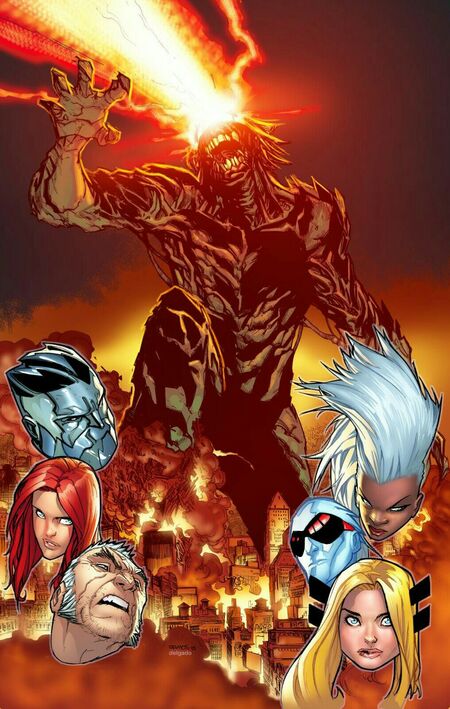 So, I've just read Extraordinary X-Men #4 (yeah, I'm kinda late), and I think I know what Cyclops did that turned him into the most hated Muntant the world has ever know, and I want to discuss about it. Remember it's just a theory of mine (although I think someone may have tought about it already somewhere, 'cause it's kinda obvious if this is indeed what happened), nothing was confirmed yet. Oh, and it has some SPOILERS for you that hadn't read the Extraordinary X-Men's fourth issue yet (and maybe for the future issues too), so beware!

Well, I got this idea after Nightcrawler said something in one of Colossus' hallucinations. It was "It wasn't me... It was the Inhumans. And Cyclops-- Scott-- They doomed us all."

I know it was an hallucination and that Nightcrawler was a bit nuts at the time and all, but what struck my mind when I read that was just insane that I think it's probably what happened: Cyclops became a mass murderer! But who he killed? Well, after somehow acquiring some Terrigen Crystals (or maybe a Terrigen Bomb), he massacred a lot of mutants! :O

Why do I think that? Think about it: Cyclops have fought his whole life to ensure his race had place in the world among the humans, but when the Inhumans emerged after Black Bolt set off his Terrigen Bomb, the mutants he swore to protect started dying because of the Terrigen Mists and he started to see that the dream was dead. No matter how many times they fight, there was no way to save mutantkind. They were all doomed from the start. His soul died. So he simply decided to "euthanize" his fellow mutants to prevent them and the others yet to come into being from living the suffering what was waiting for them in the foreseeable future. He stole from the Inhumans and doomed his own race with a stronger version of the Terrigen Mist. He simply went mad, and now not only the mutants are nearly extinct but are seen as menaces (again) for what might have happened that day. And the Inhumans were caught in the middle of it, becoming menaces as well.

So, uh, that's it. This is what I think happened during the eight months gap between Secret Wars and All-New, All-Different Marvel. Kinda depressing, huh? Other thing I noticed was Sinister mentioning an Evolutionary War happening, and then I remembered that in the final issue of Uncanny Avengers Vol 2, the High Evolutionary said that an Evolutionary War was going to happen. Does he have something to do with what's happening, and may be the big bad in a future X-Men/Inhumans crossover? Or he just knew that it was going to happen? Or maybe it was just a coincidence?

Anyway, this is it people. I hope you have enjoyed this insane theory that popped inside my not too sane mind (who would've enjoyed it? It's (insert a "beatiful" word here) sick!), and I want to know what do you think about it. Do you like it? Do you hate it? Do you want to kill me because of what I think your all-time favorite X-Men did to his own race? Tell me in the comments below!

Note: This is not what actually happened in your beloved stories. It's just a theory of what might have happened, written here by someone who's not very reliable (hehe). Please, treat it as such.

Retrieved from "https://marvel.fandom.com/wiki/User_blog:The_Many-Angled_One/I_Know_What_Cyclops_Did_Last_Summer?oldid=3281139"
Community content is available under CC-BY-SA unless otherwise noted.