I know a lot of us are a bit skeptical of the upcoming Netflix series "Marvel's Daredevil," but to be fair, Netflix seems to be emerging as a legitimate producer of successful original shows. Orange is the New Black, House of Cards, Lilyhammer, Hemlock Grove, Marco Polo, and even BoJack Horseman... All original Netflix shows that have been renewed beyond their first season. Given the existing popularity we've seen with Agents of S.H.I.E.L.D. and Agent Carter, and the fact that this new series will similarly share continuity with the films of the MCU franchise, it's a safe bet that Marvel's Daredevil will enjoy its own measure of success, but how much?

I've heard debates about decision to cast Charlie Cox in the lead role, and of course I'd like to hear your thoughts on that, but what about Vincent D'Onofrio as Wilson Fisk / Kingpin? Netflix just released a second image of him in character (where we can actually see his face), and while at first I couldn't picture it, apparently he packed on 30 extra lbs just for this role... and it seems right to me! Now, obviously they were going to be hard-pressed to find a suitable actor who truly matches Fisk's described size (6'7" & 450lbs??), but D'Onofrio's acting chops are huge, and in an interview with USA Today, he mentions that he's researched the comics and the character. Personally, I'm more than willing to spot him the size difference in favor of NOT using CGI or a cheesy "fat-suit" to make up the balance. Honestly, does this look like someone who is not serious about playing this character? 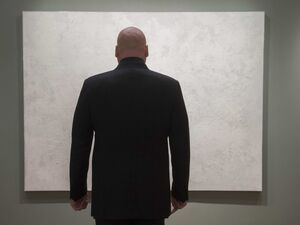 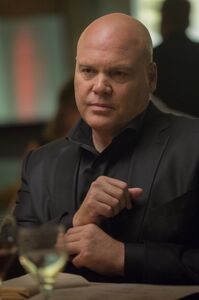 "I wanted him to have an appearance of being super-powerful so that when he throws a punch, it's a major punch, there's a lot of weight behind it."
–Vincent D'Onofrio on preparing to portray Kingpin

"He had a passion and an understanding of what we were trying to do, of making it a very grounded, gritty, realistic show. Here is an actor who's really thinking about it on not only a character depth but a visual depth that I really loved."
–Exec. Producer Steven DeKnight on D'Onofrio

From the looks of the trailer, it definitely seems like they're trying to embrace the dark side of this story:

So - what do you all think? Will this show be a hit? Is Charlie Cox the right Daredevil? Is this the right Kingpin? Feel free to vote, but I'd rather read your input - if these aren't the actors for this show, who would you have chosen?

Retrieved from "https://marvel.fandom.com/wiki/User_blog:XD1/Kingpin:_Netflix_/_Marvel%27s_Daredevil_Edition_***UPDATE***?oldid=2943458"
Community content is available under CC-BY-SA unless otherwise noted.