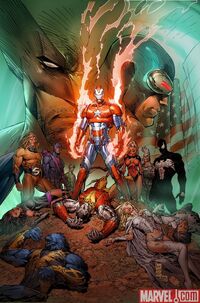 After the events of Messiah Complex storyline, Cyclops ordered Wolverine to form a new X-Force team to act as his own covert black-ops squad, something Cyclops himself told no one outside the team, in particular the co-leader of X-Men and his lover, Emma Frost. Also, in the Secret Invasion: Dark Reign one-shot, at the first meeting of the Cabal Norman Osborn promised Emma Frost to leave the mutant community in San Francisco alone, provided she kept them under control. Emma kept the fact that she belonged to the Cabal from Cyclops himself. These secrets caused a split in their relationship.

Another event of note happened at the start of Messiah Complex, when at the place of birth of the new mutant child in Cooperstown, Alaska a battle took place between Marauders and Purifiers, resulting in the town being positively razed. After that Simon Trask, the brother of the original Sentinels creator Bolivar Trask and a fierce political anti-mutant activist has called for legislating mutant reproductive rights. Trask's influence resulted in many states supporting to this anti-mutant legislation, which in turn began to cause turmoil in the mutant community.

Retrieved from "https://marvel.fandom.com/wiki/Utopia_(Event)?oldid=5517845"
Community content is available under CC-BY-SA unless otherwise noted.