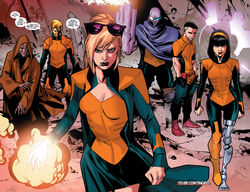 The Utopians were a group of mutants that started inhabiting Utopia, the abandoned and former base of the X-Men. They fought off any attempt from anybody at entering the island.[1]

The X-Men were reached out by S.H.I.E.L.D. to investigate the island after a recon team went missing. The X-Men teleported to the island, and initially engaged the Utopias. After talking it out and discovering the Utopians wanted nothing but to be safe and undisturbed, the X-Men offered them a place at the New Charles Xavier School, which they gladly accepted.[2]

Retrieved from "https://marvel.fandom.com/wiki/Utopians_(Earth-616)?oldid=5517844"
Community content is available under CC-BY-SA unless otherwise noted.