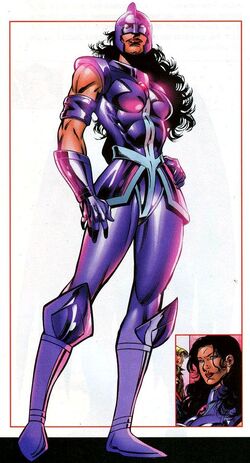 The Utopians had been experimented on by the Kree, to the point where they became powerful beings and therefore isolated themselves from humans (much like the Inhumans of Earth-616.[1]

Utopians hail from Utopia Isle, a small island nation in the southern sea.[1]

At the time humans was producing flint spearheads to slay each others, the Utopians had developed a society based on peace, fellowship, and knowledge; free of poverty, injustice, sexual discrimination, crime, or war.[1]

With the creation of nuclear weapons on Earth, the Utopians became fearful of the future of the planet and decided to leave the island in a starship of their design, leaving Zarda behind as their emissary.[1]

The Squadron Supreme used the ruins on Utopia Isle as their command post and speculated that at some future point they would return to aid their princess in her war against wayward humanity.[2]

In this reality, the Utopian race coexisted in the same universe with the Inhumans but as aliens from another planet rather then an alternative Earth. At some point they once fought alongside Asgardians in the battle of Muspelheim. The planet they lived on was inevitably destroyed by the Squadron Supreme when the people of their world wouldn't bow to their rule. The only known Utopian currently alive is the Squadron member Power Princess.

Retrieved from "https://marvel.fandom.com/wiki/Utopians_(Race)?oldid=6393874"
Community content is available under CC-BY-SA unless otherwise noted.