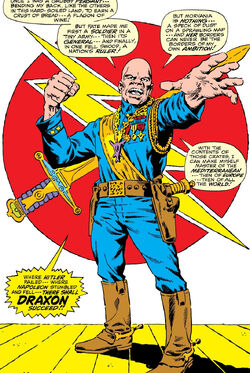 Václav Draxon was the dictator of Morvania, intent on conquering his neighboring nations and eventually, all of Europe. He had been born a peasant and risen through the ranks of the military until he took power[2] by killing the former king and taking his Imperial Amulet. He was killed by the Hulk who had become involved in assisting the country's rebel movement.[3]

Like this? Let us know!
Retrieved from "https://marvel.fandom.com/wiki/Václav_Draxon_(Earth-616)?oldid=4438770"
Community content is available under CC-BY-SA unless otherwise noted.