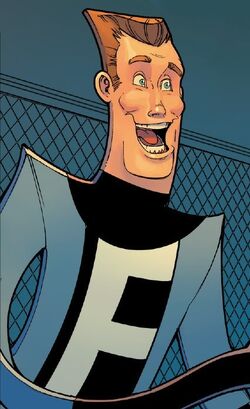 Matt was a mutant who could flatten and stretch his body to great lengths. After dropping out of community college, he started working at Coolio Beans Coffee, where he met a party organizer named Andrew. He witnessed Matt making use of his powers, and convinced him to work for him, impersonating Mr. Fantastic in parties. After working together for a while and even starting a relationship with Andrew, Matt grew tired of his lifestyle and decided to become a superhero just like Mr. Fantastic. When Andrew pointed out Matt was poor and uneducated unlike Reed Richards, Matt decided to create a fake alter-ego to go with his superhero name, and so he started calling himself Dr. Val Ventura, aka Flatman. Matt attempted to convince Andrew to work with him and become his sidekick, but Andrew decided to leave him since he considered Matt's idea to be unrealistic.[1]

As Flatman, he acted as the deputy leader of the Great Lakes Avengers, an unauthorized division of the regular Avengers superhero group that watched over the Wisconsin area.[2] Called the "2D Defender", his primary role included long-ranged rescues and helping the team solve crimes with his extensive knowledge of fashion which he was reported to have "studied in college."[9]

Due to his fake identity, he was unable to present a degree that proved his education and, when asked by Doorman what he was a doctor of, Flatman replied that he was a doctor of "stuff." Though Flatman often seemed to act intelligent, he never actually proved any sort of superior intellect.[10]

Most recently, Flatman and his fellow GLA members took on Maelstrom who was trying to destroy the world. When Dinah Soar was killed, GLA leader Mr. Immortal went crazy and Flatman stepped up as deputy leader.[3] Deciding that the team needed some new members, he and Doorman went to New York city where they drafted Squirrel Girl and Grasshopper, the latter of who quickly passed away on their first mission.[11] Refusing to let the deaths of Dinah Soar and Grasshopper get him down, Flatman continued to try and persuade the team to further research Maelstrom's plans for world destruction. However, it was not until Mr. Immortal regained his sanity that the team rallied together and defeated Maelstrom. Flatman was seemingly sucked into a vortex during the final battle but it turned out that he barely escaped and was merely standing at an angle so that his flat body could not be seen because his clothes had been sucked off.[10]

With the GLA facing a newer, stronger resolve than ever, they returned back to their headquarters only for Flatman to find that Tony Stark had sent a cease and desist notice ordering them to stop using the Avengers name.[10] They changed their name to the Great Lakes X-Men and on their first mission under that name Flatman helped them to save Christmas in Muskego from the evil Dr. Tannenbaum (a Christmas hating villain whose robot snowman they had defeated before) and his killer Christmas trees.[12]

The team was invited to the annual Superheroes Poker Tournament after Squirrel Girl helped the Thing (the host of the game) in defeating the Hulk villain, Bi-Beast. In the end, Flatman won the Tournament with a straight-flush, beating The Thing's four fours. After being discouraged from using "Great Lakes X-Men," and then "Great Lakes Defenders," by members of those teams present at the Tournament, Flatman becoming the "champion" of the Tournament inspired the team to rename themselves the Great Lakes Champions, despite protests from former Champions of Los Angeles member Hercules.[4]

All of the Great Lakes Champions registered with the United States government as required by the Super-human Registration Act, as discovered by the mercenary Deadpool who mistakenly attempted to apprehend them for violating the Act, only to be defeated by the GLC and informed that they had already registered.[13]

Flatman and his teammates became the initiative group in charge of Wisconsin, now calling themselves the Great Lakes Initiative. They were given a rescue mission to save Dionysus after he fell from Mount Olympus. During the task, Flatman and Mr. Immortal were ambushed by Deadpool. Flatman was able to persuade Deadpool into becoming an honorary member of the Great Lakes Initiative, and he aided them on their mission. Afterwards, however, Deadpool overstayed his welcome, and Flatman felt obligated to get the "Merc with a Mouth" to pay for all the items he charged to the GLI account. After confronting Deadpool, the two battled, and Flatman revealed his new fighting style -- Origami-Fu. Transforming into various origami styles, such as a crane, a monkey, a tiger, and a frog. Deadpool then convinced him to turn into a boat and defeated him by stapling him together, using him in his bath. The group eventually had Squirrel Girl kick Deadpool out of their headquarters.[5]

The GLA in Detroit

Sometime later, as a consequence of major shake-ups in Stark Holdings, the ownership of the trademark for the "Avengers" name was transferred to the only other entity who had also applied for the trademark, Flatman. Connie Ferrari, the legal representative of the Avengers, attempted to negotiate with him to buy the name back, and Flatman managed to get her to reinstate the Great Lake Avengers as a permanent and official addition to the Avengers.[6]

He then attempted to get the band together, but only Big Bertha and Doorman appeared, because Doreen was now too famous and, unknown to them Craig's phone was now in possession of a local girl named Pansy. Unwilling to "assume things," Pansy showed up at the rendezvous point, an abandoned Stark Assembly and Manufacturing plant the Avengers had set up as the GLA new headquarters in Detroit, Michigan, and waited for the Great Lakes Avengers. Once they arrived, Pansy cleared up the confusion caused by her presence and showed the team around the facilities.[6]

The team's problems began when they had the tremendous idea of going to a local bar in the middle of the night and try to convince them to turn the music volume down. The owner Nein Rouge instead refuses and begins to insult them. Upon getting arrested after a fight, Flatman and Bertha are left in jail with a young girl named Goodness Silva, who can turn into a wolf. There are some complications, but everything turns out fine as they're all later released thanks to Connie Ferrari, the legal representative of the Avengers.[14]

Following this misadventure, the team was served with an injunction, forbidding them of performing any superhero activity. Mister Immortal rejoined the team and went on patrol with Flatman while Bertha, Doorman and Goodness, now going by the name of Good Boy, investigated Nain Rouge's bar, where they found the villain was in fact councilman Dick Snerd.[1] When Flatman and Mister Immortal returned from patrol, they discovered Bertha and Good Boy had taken Snerd hostage. When Connie arrived to help the team with the injunction, she not only that they had taken Snerd, but also that in a fit of rage, Good Boy severely hurt him. The team dropped him off at a hospital and escaped.[15]

The Great Lakes Avengers' following call to action occurred after Big Bertha was kidnapped by a scientist named Doctor Nod who harvested her DNA to create a pill supplement to alter its user's weight at will. Even though Bertha managed to escape from his grasp on her own, Doctor Nod tried to take her down, consuming an enormous amount of his own pills in the process, becoming a mindless giant who started to tear the city apart.[16] Doctor Nod was finally defeated after Doorman teleported Mister Immortal inside his body and had him punch his heart.

Even though the city applauded the heroes, the GLA's rejoicing was abruptly cut short when Deadpool appeared on their doorstep and, as a member of the Avengers Unity Division, told them they were fired, informing them that their legal claim of the name didn't hold up in court. He stated that people simply didn't like them, but comfort them, proclaiming that in a few years they could try to be in the spotlight again.[17]

After this, Flatman was summoned by Loki to help Squirrel Girl against the Silver Surfer.[18] Upon his return to Earth, he had a stand in The Alley Behind A Closed-Down Laundromat Comic-Con, next to Forbush Man.[19]

Flatman was born a mutant with the following abilities:

Like this? Let us know!
Retrieved from "https://marvel.fandom.com/wiki/Val_Ventura_(Earth-616)?oldid=6485472"
Community content is available under CC-BY-SA unless otherwise noted.