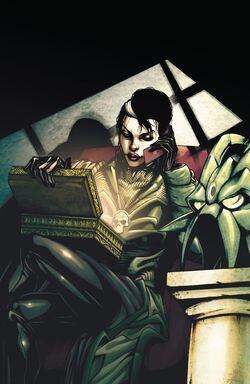 ...After both of my parents were killed in the resistance, life became meaningless.

Little has been revealed about the past of the Contessa Valentina Allegra de la Fontaine. She and her parents were sleeper agents for Leviathan inside the Italian anti-communism movement. Unaware of this, Dum-Dum Dugan recruited her. Formerly a member of the European "jet set," the Contessa sought a more serious role in life, and eventually entered a training program to become an agent of S.H.I.E.L.D., the international intelligence and law enforcement agency. She first encountered Nick Fury, the Public Director of S.H.I.E.L.D., towards the end of her training, when she impressed him by overpowering him in hand-to-hand combat.

As a result of her remarkable talents and skills in many areas, the Contessa soon became a leading member of S.H.I.E.L.D.. Her first major assignment for S.H.I.E.L.D. was her participation in the battles against the robotic duplicate of the Yellow Claw.

Nick Fury and Valentina became lovers after his relationship with Laura Brown appeared to end. Valentina eventually moved in with Nick. Jealous of Nick's on-again off-again relationship with Brown, Val flirted with sometime S.H.I.E.L.D. operative Captain America. This angered Nick and he and the Captain became estranged for some time. Nick confronted Captain America at his apartment, and the two fought intensely over Val. However, Val interrupted the fight and explained her motives. The three appeared to leave the matter on friendly terms.[4]

At one point the Contessa was the leader of S.H.I.E.L.D.'s Femme Force, an elite cadre of female agents. The disputed leadership of Femme Force, and Val's flirtations with Sharon Carter's boyfriend, Captain America, also led Val and Carter to have a frosty relationship. Nothing has been recently revealed about the Femme Force's activities; and it may therefore be presumed that the group was disbanded years ago.

The Contessa was among the small number of leading agents loyal to Fury who were not killed and replaced by one of the artificially created human beings called the Deltites. The Contessa was among the S.H.I.E.L.D. agents who struggled against the Deltite takeover, which was finally defeated by Fury and others. Following the defeat of the Deltites, Fury persuaded the United Nations to disband S.H.I.E.L.D.. Aided by the Contessa and a few more of his closest loyal aides, Fury traveled throughout the world, closing S.H.I.E.L.D. bases and destroying its most dangerous weaponry and technology.

When Nick Fury went underground, most of those close to him in S.H.I.E.L.D. were sent to lower profile positions, the Contessa among them. She was reassigned to be S.H.I.E.L.D.'s liaison to the U.K.. It was in this capacity that she was assigned to help Union Jack, along with the Israeli superheroine Sabra and the new Arabian Knight, to stop a R.A.I.D. terrorist attack on London.[5] When supervillains began attacking multiple areas of the city simultaneously, the Contessa went with the Arabian Knight to stop Firebrand and Boomerang from attacking Heathrow Airport. They succeeded in stopping the villains, but not before R.A.I.D. agents were able to hijack a plane which they planned to use as part of their terrorist attack. Luckily, Union Jack and Sabra quickly arrived to rescue the plane.[6] The Corruptor was also hiding at Heathrow Airport and used the opportunity to subvert the Contessa, Arabian Knight, and Sabra's wills, turning them against Union Jack. Jack, however, managed to maneuver his teammates into taking out the Corruptor, and then was able to dispatch each of his allies without seriously injuring them.[7] The Contessa scoffed when she learned that the weapon of mass destruction that R.A.I.D. had smuggled into the country was a Dreadnought, claiming that she had defeated many of the robots in the past. She shut up when she saw the new upgraded model that the terrorist group had sent on a rampage in Trafalgar Square. The ad hoc group of heroes managed to neutralize the robot with the assistance of some local workers before it did too much harm.[8]

In her capacity as S.H.I.E.L.D.'s British Liaison, the Contessa worked with Commodore Lance Hunter, Head of Armed Forces Paranormal Response (AFRP), and Alistaire Stuart, on the British version of the Superhuman Registration Act. Part of that function was also to explain the Act's ramifications to the British superhuman population. In that optic, the three intelligence agents met with Joseph Hauer, Pete Wisdom, Captain Britain, and Union Jack to brief them on it.[9]

The Contessa secretly joined Hydra, taking the identity of Madame Hydra. She manipulated Hydra into taking a powerful artifact called simply the Box from the Silver Samurai.[2] She then betrayed Hydra to the shadowy Leviathan, stealing the Box, and nearly killing Viper. Working with Magadan, she awakened Orion and a large army of Leviathan soldiers.[10] This led to a war between the two organizations.[10][11]

Having been discovered to have been a Russian sleeper agent throughout her career with S.H.I.E.L.D. as well, following the end of this conflict the Contessa surrendered herself to Interpoland was imprisoned.[12] However, Fury soon set a plan into motion to break her out. [13]

Later she became a member of a secretive council known as J.A.N.U.S. which used Norman Osborn to gain a behind the scenes control of the rebuilt Ravencroft Institute.[14]

The Contessa is a superb hand-to-hand combatant, a brilliant marksman with firearms of most kinds, and an excellent leader and strategist on combat missions in the field.

The Contessa possesses the normal human strength of a woman of her age, height, and build who engages in intensive regular exercise.

Like this? Let us know!
Retrieved from "https://marvel.fandom.com/wiki/Valentina_Allegra_de_Fontaine_(Earth-616)?oldid=6544454"
Community content is available under CC-BY-SA unless otherwise noted.