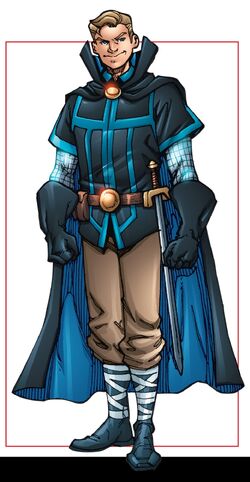 Who do you think you are to judge me?! You presumptuous fleas! You cannot hope to fathom what I've experienced!

Vali Halfling was born of a mortal mother and the trickster god, Loki. His father brought him to Asgard and took him under his wing, and there Vali befriended Siingard. At one point, Vali found himself trapped in Hel, the underworld of Asgard, but his half-sister Hela released him as a token of familial affection. When Vali angered the Asgardians by stealing many of their secrets, Odin banished him to Midgard, cursed with eternal adolescence. On Earth, despite his youthful appearance, Vali had many children, but few of them inherited divine abilities.[citation needed]

Vali traded the pick of his future offspring to the Troyjan race in exchange for knowledge of immortality. Agamemnon neither claimed nor denied being the Agamemnon who was king of Argos and commander-in-chief of the Greek army against Troy in ancient times. Since that time, he claims to have assumed dozens of identities and have fathered hundreds of children. At a relatively recent point in time, Agamemnon was instrumental in establishing the Pantheon, an interventionist think-tank dedicated to improving the human condition by ending war, famine, and disease. He often recruited his own decedents who exhibited superhuman abilities, such as near-immortality, due to their hybrid nature. No one saw Agamemnon personally in recent times, as he preferred to use a holographic projections to communicate with others while residing within the Pantheon's headquarters (It was never revealed whether Agamemnon's projection were technological, magical, or psychic in nature, and the true limits to the range and size of his projection is unknown).[citation needed]

Ultimately, he betrayed the Pantheon. When his children became aware of the betrayal, he attempted to slay them all. While trying to escape, his rocket was shot down, and he died.[citation needed]

Vali was resurrected along with the other Asgardians after the last Ragnarök.[3]

Acting without a holographic disguise, Vali took back control of the Pantheon and convinced several of them, including Atalanta, to return to his side with the promise of saving humanity while making them real deities. The Pantheon also became a subcontractor of the Olympus Group.[4]

After the Siege of Asgard, Vali, intending to develop a formula for omniscience, stole the Golden Apples of Idunn and prepared plans to acquire other ingredients. Vali manipulated the new director of the Olympus Group, Amadeus Cho, so that he would complete the formula for him: He came to him, offering to team up, but intending on Cho refusing and going on his own on the quest.[4]

As Cho left to steal the apples, already stolen,[4] Vali's troops invaded the Olympus Group's facilities, stealing the Olympian Ambrosia from Hebe, cup-bearer of the Olympians, and destroyed the Promethean Flame that maintained the power of the Olympians, causing their rapid aging and impotence. He directly appealed the Council of Godheads and mocked them, revealing his intentions and causing panic among the Pantheons.[1]

To oppose him, Cho allied with Thor and went on the quest of gathering the other ingredients before Vali. Meanwhile, Vali captured Athena while she returned from the Council, already withering. That done, he had control over the Olympus Group, unaware of the escaped Delphyne Gorgon.[1]

Absorbing the magic spell book, Vali entered the field of Hindu gods, Krauncha, and forced demons, the Asura, to help find the Moon Cup, held by the god of doctors Dhanvantari. While Vali was able to stand up to Cho and Thor, he was surprised by Delphyne, who had taken control of Atalanta's weapon after defeating her. This distraction allowed Cho to complete the formula developed by Vali and granted himself omniscience, negating all damage caused by Vali and sending him to Duat, where he found himself before Sekhmet's punishment.[3]

When the mutant Wolfsbane was carrying the child of Hrimhari the Wolf Prince, Agamemnon was one of the many mythical beings hunting the baby. He employed Cerberus to hunt Rahne and lead her to him.[6] Once he had Rahne in his cabin, he bound her with enchanted chains and created sigils to prevent the child from leaving. Almost immediately after his birth, Rahne's child escaped his mystical bindings and attacked Agamemnon, seemingly killing him.[7]

Vali is a human-Asgardian hybrid, providing him various advantages over other humans.

Due to a curse from his father, he was to remain forever a teenaged boy:[1]

Agamemnon has access to the highly advanced technology of the Pantheon

Vali often carries revolvers loaded with bales of mistletoe that can injure the gods.

Like this? Let us know!
Retrieved from "https://marvel.fandom.com/wiki/Vali_Halfling_(Earth-616)?oldid=6535445"
Community content is available under CC-BY-SA unless otherwise noted.