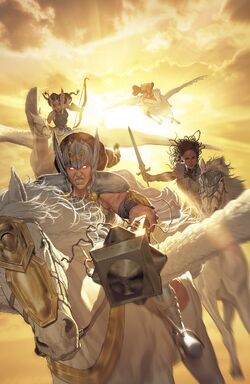 The Valkyries were female demigodesses who conducted the souls of Asgardian warriors slain in battle to Valhalla, an area of the Asgardian dimension. They consisted of nine warriors who rode winged horses, and were led by Brunnhilde. In ancient times, the Valkyries used to take the mortally wounded human heroes from German and Scandinavian battlegrounds as well. The Valkyries were no longer able to perform this task when Odin, ruler of Asgard, vowed to the Celestials a millennium ago that he would severely restrict Asgardian contact with Earth.[citation needed]

It should be noted that the concept of warrior-women riding flying horses and conveying the souls of the worthy fallen warriors to the afterlife is frequent in mythology:

In modern day, Brunnhilde became a member of Earth's superhero team known as the Defenders. The remaining Valkyries were killed in a war between Odin and Hela over rulership of Valhalla. Odin restored the Valkyries to life after he regained possession of Valhalla, but these Valkyries only had physical forms within Valhalla; outside it, they existed only in astral form. Valtrauta took Brunnhilde's place as the leader of the Valkyrior, and Hildegarde's sister Krista filled the role of the ninth Valkyrie, left open since Brunnhilde's departure.[citation needed]

By the time Malekith the Accursed waged his War of the Realms, the Valkyries had grown into an army. When Niffleheim was invaded by the queen of Muspelheim, Sindr, Thor had Loki use magic to fake his death in such a way he would still be sent to Valhalla.[6] Once there, Thor recruited the Valkyries and the Einherjar to help fend off Sindr's forces.[7]

During Malekith's assault on Manhattan, the Valkyries were summoned by Odin to help defend the island, having seemingly regained the ability to pass into the real world. Due to an evacuation spell gone awry, Doctor Strange accidentally teleported most of the combatants away from the fight, leaving the Valkyries to stand alone against Malekith's forces. They were all ultimately slain in battle, and Brunnhilde was the last Valkyrie to fall.[8]

The Valkyrior have inherent mystical powers allowing them to perceive supernatural phenomenon, especially to see astral spirits (ghosts) and sense when mortal beings are near death; a perception that appears as a glow around the form of a person about to die. Beyond Asgard, they appear only as shades (astral forms). They are extra-ordinary warriors wielding swords and shields and usually transport themselves aloft on winged horses which attain an astral form with them beyond Asgard.[citation needed]

Odin granted the Valkyrior the ability to traverse the nine realms unhindered by physical boundaries that they might ferry the spirits of the noblest warriors into Valhalla.

The Valkyrior possesses the conventional attributes of the Asgardian gods including superhuman strength (Class 40), stamina, resistance to injury and long life enchantments.[citation needed]

The Valkyries wear Uru armor which protects them from harm.[citation needed]

Each of the Valkyrie carries a sword.[citation needed]

They usually transport themselves aloft on winged horses which attain an astral form with them beyond Asgard.[citation needed]

Like this? Let us know!
Retrieved from "https://marvel.fandom.com/wiki/Valkyrior_(Earth-616)?oldid=6471015"
Community content is available under CC-BY-SA unless otherwise noted.