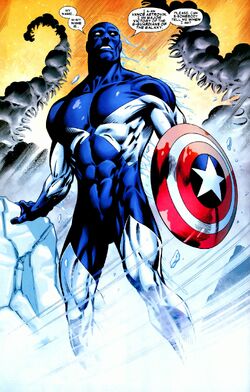 My name... M-my name is... I a-am Vance Astrovik. I am Major Victory of the G-guardians of the galaxy. Please, can s-somebody tell me when I am?

Vance Astro shared a similar history to his Earth-616 counterpart until, at 16 years old, Vance's mutant powers did not manifest leading him to join the airforce.[2] As a young man, Astrovik changed his name to Vance Astro. After a tenure in the U.S. Air Force, he was accepted into the astronaut program at a very young age and was assigned for a special mission to help colonize Centauri-IV. He was placed in suspended animation and when his ship was found centuries later, Earth had already colonized the other planets in the Sol System. The Badoon attacked soon after and Vance found himself attempting to escape with Yondu. They were captured and sent to the enslaved Earth. However, they escaped and Vance found himself leading a group of fellow adventurers who named themselves the Guardians of the Galaxy.[3]

After traveling to the present, the Guardians were given honorary Avengers status.

While in the present, Vance attempted to convince his younger self to not take the same path he did. The young Vance's mutant powers emerged during the meeting. Upon returning to their time, the Guardians defeated the Badoon and drove them off Earth. Like his fellow teammates, Vance found himself unable to fit in with civilian life on the post-invasion Earth. He joined them in leaving the planet and exploring the galaxy.[4] He destroyed the planet-killing Topographical Man by joining with fellow Guardian Nikki in a metaphysical act of love.[5]

Vance found Captain America's Shield, fell in love with Aleta, who was still married to her estranged husband, Stakar, only to watch him absorb her into his body during a battle with Malevolence, the daughter of Mephisto. This act forced him and the rest of the team to vote Stakar off the team.

The Guardians returned to Earth, where after reuniting with their old friend Tarin they were mistaken for bad guys by her team of freedom fighters, the Commandeers. Once tempers had cooled down and the teams reconciled, they were attacked by a street gang calling themselves the Punishers, after learning about Frank Castle from holo chip recordings made by Vance. A sniper shot Vance as he and the others were leaving their base, the former Sub-Basement of the Avengers Mansion. Although the sniper's aim was thrown off due to a last second save by the Inhuman Talon, the bullet still struck his temple and nearly killed him. As the Guardians and Commandeers fought the Punishers, Hollywood, formally Wonder Man, carried Vance to safety. Because the bullet was able to rupture his Adamantium containment suit, it is assumed the bullet was composed of Dargonite, Simon gave Vance some of his ionic blood while Sorcerer Supreme Krugarr used a spell to not only save his life, but destroy his containment suit and stop his body from aging rapidly.

The New Guardians of the Galaxy

Shortly after the Phalanx conquest, Starlord and his unnamed team came across Vance, along with part of the Avengers Mansion, frozen in Limbo Ice. Freed by Phyla-Vell, he then accompanied the team back to their base on Knowhere, joining their team and inspiring them to use Guardians of the Galaxy as their name.[6] Suffering from amnesia, Vance was soon attacked by a Starhawk, who changed appearances and identities numerous times.

Without his suit, Vance ages rapidly.

Vance originally wore a purple astronaut suit intended to help his body withstand surviving a 100+ year long space journey. He picked up his traditional blue/white outfit, made of chainmail, when the original Guardians visited Io shortly after escaping from the Badoon. After facing Overkill for the first time, Adamantium was placed along his outfit to protect him. After Krugarr's enchantment protected him he began wearing an outfit similar to Captain America. Later on his symbiote-like suit which was given to Vance by the Beyonder protected him.[7]

Passport armbands, allowing him to use Knowhere's teleporters

Like this? Let us know!
Retrieved from "https://marvel.fandom.com/wiki/Vance_Astro_(Earth-691)?oldid=5773828"
Community content is available under CC-BY-SA unless otherwise noted.