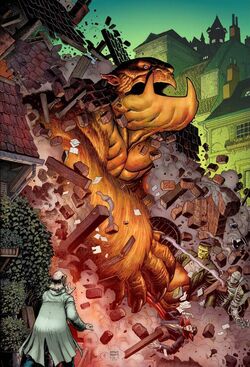 In a village in Transylvania, Ludwig Vandoom wanted to create a star attraction for his failing wax work museum.

Despite the protests of the superstitious townsfolk, Ludwig Vandoom created the fearsome, giant wax figure of a monster and put it on display.

During a freak thunderstorm, lightning struck the monstrous wax figure and miraculously bringing it to life. Smashing out of the museum, the monster was attacked by frightened villagers.

Meanwhile, a alien spaceship landed close to the village. The aliens wanted to conquer the village and set it up as a base for Earths invasion. The wax creature returned to the village and fought the aliens. Exhausted, the giant wax figure collapses and appeared to die. [1]

The wax creature was later seen among a group of monsters being held in the Collector's subterranean museum. The monsters escaped captivity during the Collector's battle with the Mole Man, and some of the monsters attacked New York City, but were fought off by a group oh heroes consisting of Thing, the Hulk, Giant-Man, and the X-Man Beast. The defeated monsters were later dispatched into the Negative Zone.[2]

Sometime later, Nightmare created duplicates of several monsters, including a duplicate of the wax creature, to attack a young Peter Parker in his dreams.[3]

At some point he returned from the Negative zone and joined The Mole Man's monsters on Monster Isle, and was one of the monsters controlled by the Skrulls to attack major cities. He was later freed from there control and the Mole Man used him to attack the Skrull and the Fantastic Four.[4]

Vandoom's Monster later fought the Guardians of the Galaxy in San Diego upon emerging from the ocean before he was defeated by Thor.[5] Vandoom's Monster assisted in the fight against the Leviathons.[6]

Like this? Let us know!
Retrieved from "https://marvel.fandom.com/wiki/Vandoom%27s_Monster_(Earth-616)?oldid=4694262"
Community content is available under CC-BY-SA unless otherwise noted.