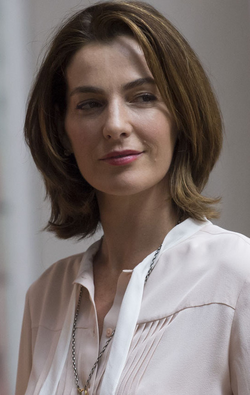 Vanessa Mariana was the curator of an art gallery, where she met Wilson Fisk, a millionaire and secretly a criminal mastermind.[1] Fisk felt attracted towards Vanessa, and asked her to take her on a date. On their first date, Vanessa realized Fisk was more than a millionaire, due to the interruption of a Russian criminal said evening.[2]

On their second date, Vanessa confronted Fisk regarding his true nature, and he revealed to her his plans with the city. She remained by his side.[3] Later, with the support of Vanessa, Fisk decided to make his existence public, giving the public the impression he was nothing more than a philanthropist worried about his city.[4]

Like this? Let us know!
Retrieved from "https://marvel.fandom.com/wiki/Vanessa_Marianna_(Earth-199999)?oldid=6074713"
Community content is available under CC-BY-SA unless otherwise noted.