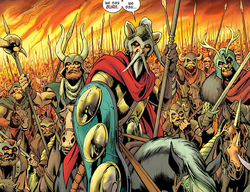 The modern race known as the Asgardians is actually a blend of the Aesir and the Vanir.

The First God, Buri, bore three sons called Bor, Mimir, and Njord. Bor and his sons Odin, Ve and Vili founded the race known as the Aesir, while Njord left, sired the Vanir and founded Vanaheim.[12][13]

In their early history, the Vanir built gigantic castles mountain-sized and citadels that could be seen from worlds away.[3]

They later grew weary of the warfare required to defend them, and decided to return into the forest, leaving their towers to fall apart,[3] known as the "ruins of Vanaheim".[14]

Freyr later became the leader of the Vanir.[15]

In his youth, Odin and the time-travelling Old Loki met with an human-sized otter whom Loki killed and crafted two fur coats from. Arriving to the inn of Hriedmar of the Vanir, they soon learned that the otter was Hriedmar's son Otr the changer of shapes. As Loki settled the debt with gold (stolen from Andvari, who had cursed it) and left with Odin, Hriedmar's son Fafnir's greed was revealed by the curse: he killed Hriedmar, left his brother Regin for dead, and departed with the gold.[16]

Regin's violence was revealed by the curse as well, and he swore vengeance upon his brother and upon all Asgardians. While the curse changed Fafnir into a dragon, Regin crafted the sword Gram, Fafnir's Death and Asgard's bane. After having Sigurd to kill Fafnir, Regin tried to murder the Asgardian, only to be slain in return.[16]

For the full presentation of this event, please consult the Aesir/Vanir War page.

A generation ago as Gods perceive time, the young king Odin of the Aesir tried to force the union of the two tribe, and went to war with Freyr and the people of Vanaheim. Seemingly over a matter of pride, Freyr refused to bend. He received support from Surtur of Muspelheim. The war ultimately ended with a peace treaty and marriage between the two royal families, as Odin was betrothed to Freyr's daughter Freyja. Their union marked the union of the two people.[9]

No matter the peace, and despite the fact that the records of the war were destroyed, a certain grudge existed among the Vanir towards the Aesir and Asgard remained,[8] even beared by Njord, who despised Odin's race.[10] Although, Vanir and Aesir mixed, and couples were wed at the Temple of Union.[18]

For the full presentation of this event, please consult the War of Angels page.

After Jotunheim paid the Angels of Heven for devising strategy, they suggested an alliance of all of the Asgardians' enemies, who consequently prepared war against Asgard, including Vanaheim. War eventually broke, with all against all and all against Asgard, with constant alliances and treasons, but with no one befriending Asgard, in fear of the Angels' wrath.[19]

The Vanir seemingly suffered from the Angels.[6]

The heir due for the peace to be sealed between Aesir and Vanir was eventually birthed in the form of Aldrif Odinsdottir,[20][21] but stolen by the Angels during the Final Battle of the War of Angels.[19]

Freyja was left devastated, unwitting to sire another heir.[6]

The Vanir and Aesir continued to coexist as Asgardians, some of them without distinction between the two former tribes, like Heimdall and Sif, but a rift remained.[22]

In modern days, after an army of Trolls, Ulik, Hyrm the Giant (commanding the boat Naglfar, itself filled with an army of the dead) led by Loki came to Asgard and killed Balder, Ragnarök was initiated, and Thor Odinson rallied the Valyries, Aesir, Vanir all-together to fight for Asgard and the honor of a warrior's death.[23]

Led by Thor, the citizens of Asgard then departed on an exodus to Vanaheim. By the time they arrived, Vanaheim was under attack from Fenris' army.[24] When Beta Ray Bill arrived and killed Fenris, his army fled away in fear.[25]

The Aesir and Vanir waited in the city of Vanaheim for the final battle,[26] while Thor led Surtur and his army to them, as part of his plan to free the Asgardians from the Ragnarök cycle and the influence of Those Who Sit Above in Shadow.[27]

After the Second War of the Serpent and Odin's departure from Asgard, the All-Mother replaced himself and instated Asgardia, wishing to rule by consensus among the realms, and assembled the Congress of Worlds, with Freyja as the representative of the "Fallen Vanir".[7]

Later, Surtur had Gullveig to rebel against Asgard, offering them the same gifts as to Freyr, along with his and the Manchester Gods' technologies. The rebel Vanir and the Engels destroyed the Temple of Union and war broke between them and all on the Nine Realms,[8] including the Asgardian Vanir.[22]

For the full presentation of this event, please consult the War of Burning / Everything Burns page.

After the War, and as Odin had been brought back from his exile, Freyja decided to carry a new heir from Odin, blood of Vanir and Aesir.[28] Nine months later was born Laussa Odinsdottir.[29]

The fate and whereabouts of the Vanir followers of Gullveig is unknown.

The Vanir were seemingly later granted a seat as Vanaheim in the Congress of Worlds, being represented by unidentified senators.[30]

When Odin dreamed of Those Who Sit Above in Shadow warning him of the incoming Ragnarök related to the Final Incursion, he tried to seal an alliance between the Realms represented in the Congress of World to destroy Midgard and save the other Realms, but none would follow him.[30]

Meanwhile, as the Final Incursion began, the Vanir were talking of revolt against the Asgardians, with old grievances gaining new airings. Freyja assured Odin that in any case, the Vanir would join forces with Asgard.[30]

As Odin blew Gjallerhorn, the heroes and allies of Asgard assembled, among them the Vanir led by Idunn, and fought Hela and King Loki's armies and allies.[11]

Like much of the representatives among the Congress of Worlds, the Vanir weren't determined to act after Jane Foster's report of Light Elves murdered and projected upon Midgard, doubting of a testimony "acquired" from Thor (Jane Foster herself).[31]

Like this? Let us know!
Retrieved from "https://marvel.fandom.com/wiki/Vanir_(Gods)?oldid=6510250"
Community content is available under CC-BY-SA unless otherwise noted.