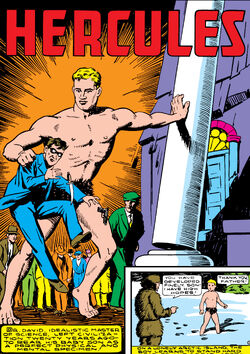 Dr. David, idealistic master of science, left civilization in the 1920's - to rear his baby son as a perfect physical and mental specimen. On a lonely Arctic island, the boy learns to stand hard weather and great labor - and his increase in size and strength is matched by his incredible mind but just as the boy becomes a huge powerful man, the doctor dies. Back in the United States, two circus owners hear about a "wild giant" on "Snow Island."

They chartered a boat, sailed into the north, and found Hercules, standing on a snow-covered island and wearing only his fur-covered swimming trunks. They gas bomb him to sleep and capture him. Hercules next woke up in the hold of the ship, chained. One of the circus owners/barkers tells him "You're going to America with us - into a show!"

Hercules, despite his great knowledge of science, seems not to be overly concerned about being kidnaped and forced into a circus; as he says, "I always wanted to see America."

Hercules is proclaimed by the circus as "Hercules, tallest titan of all time." However, while being interviewed by Bobbie Drew of the Daily Globe, Hercules sees a monster wild bull has escaped from the menagerie and is charging at himself and Ms. Drew. Hercules proceeds to grab the bull by the horns and twists the bull's head, cracking its spine. The reporter tells Hercules that "a man like you should be more than a mere circus freak! Leave this job - do something actual!" Hercules says, "Now that you suggest it - maybe I will!"

After leaving the circus after a tussle at gunpoint with its owners, Hercules sees that the dam is breaking and that the entire town is in danger. To prevent this tragedy, Hercules uproots a tree and puts it in the path of the torrent. Hercules piles rocks and wood on top and in front of the tree and made another dam[2].

Later, Hercules stops the plots of Lemo Douglas, the inventor of the "mechanical monster." Lemo actually captures Hercules and tries to operate on his brain, to make him his slave but he escapes and blow's up Lemo's estate, presumably with Lemo still in it[3]. Hercules' current whereabouts and activities are unknown.[citation needed]

Like this? Let us know!
Retrieved from "https://marvel.fandom.com/wiki/Varen_David_(Earth-616)?oldid=5715113"
Community content is available under CC-BY-SA unless otherwise noted.