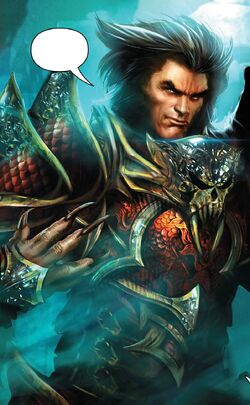 Grown using vampire magiks from a piece of flesh cut from Wolverine, Varkis was created by the vampire cult The Creed to serve as their prophesied messiah. Varkis was killed by the combined efforts of Wolverine and Blade.[1]

Seemingly those of James Howlett as well as those of a standard Vampire, demonstrating:

Like this? Let us know!
Retrieved from "https://marvel.fandom.com/wiki/Varkis_(Earth-616)?oldid=5265882"
Community content is available under CC-BY-SA unless otherwise noted.