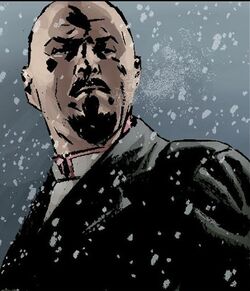 You do not understand, you cannot. You and the Germans, you have your Super-Soldiers ...Your Secret Weapons . But we Russians...we having nothing but the "Winter".

During World War II; He was involved in a joint operation with Captain America and the Invaders, in which he helped foil a plot of Red Skull and Master Man. The operation left Karpov with strong respect and fear towards Captain America.[1]

Afterwards he adopted a young boy Alexi Shostakov whose mother was killed in the battle. He raised Alexi as his own. He was involved in training and molding a young Alexi into becoming a somewhat successful Red Guardian for the Soviet Union.[1]

In 1945, Karpov also retrieved a wounded Bucky Barnes from the ocean after he had been involved and believed dead in an airborne explosion.[2] Now part of Department X; Karpov reprogrammed Barnes to become the Winter Soldier, a ruthless assassin used in numerous Cold War operations against America and her allies. He would have him put in Suspended animation between missions.[3]

Another protege of his was Alksander Lukin who he trained to take his place.[1]

He allowed the Winter Soldier to help train at the Red Room Academy for the Black Widow Ops Program. He stopped this when the Winter Solider began a relationship with Natasha Romanoff. He ended the relationship by putting him back on ice.[4]

Karpov eventually moved to the Middle East and died around 1988 most likely from age related illnesses.[4]

Like this? Let us know!
Retrieved from "https://marvel.fandom.com/wiki/Vasily_Karpov_(Earth-616)?oldid=6441512"
Community content is available under CC-BY-SA unless otherwise noted.